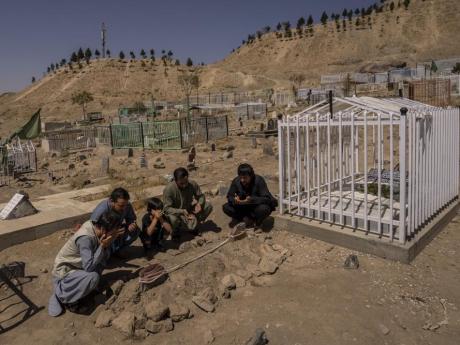 In this Monday, September 13, 2021, file photo, the Ahmadi family pray at the cemetery next to family graves of family members killed by a US drone strike in Kabul, Afghanistan. Sorry is not enough for the Afghan survivors of an errant US drone strike that killed 10 members of their family, including seven children. On Saturday, September 18, they demanded Washington investigate who fired the drone and punish the military personnel responsible for the strike, said Emal Ahmadi, whose 3-year-old daughter Malika was killed on August 29 when the US hellfire missile struck his elder brother's car. (AP Photo/Bernat Armangue, File)

KABUL, Afghanistan (AP) — A survivor of an errant United States drone strike that killed 10 members of his family demanded Saturday that those responsible be punished and said Washington's apology was not enough.

The family also seeks financial compensation and relocation to the United States or another country deemed safe, said Emal Ahmadi, whose 3-year-old daughter Malika was among those killed in the August 29 strike.

On that day, a US hellfire missile struck the car that Ahmadi's brother Zemerai had just pulled into the driveway of the Ahmadi family compound as children ran to greet him.

In all, 10 members of the family, including seven children, were killed in the strike.

On Friday, US Marine General Frank McKenzie, head of US Central Command, called the strike a “tragic mistake” and said that innocent civilians were indeed killed in the attack.

The US military initially defended the strike, saying it had targeted an Islamic State group's “facilitator” and disrupted the militants' ability to carry out attacks during the chaotic final stage of the withdrawal of US and NATO troops from Afghanistan late last month.

Discrepancies between the military's portrayal of the strike and findings on the ground quickly emerged.

The Associated Press and other news organisations reported that the driver of the targeted vehicle was a longtime employee at a US humanitarian organisation.

There were no signs of a large secondary blast, despite the Pentagon's assertion that the vehicle contained explosives.

The drone strike followed a devastating suicide bombing by IS — a rival of the Taliban — that killed 169 Afghans and 13 US military personnel at one of the gates to the Kabul airport in late August.

At that time, large numbers of Afghans, desperate to flee the Taliban, had crowded the airport gates in hopes of getting on to evacuation flights.

McKenzie apologised for the error and said the United States is considering making reparation payments to the family of the victims.