Whips, horses against Haitians, leaders lash out at Biden administration 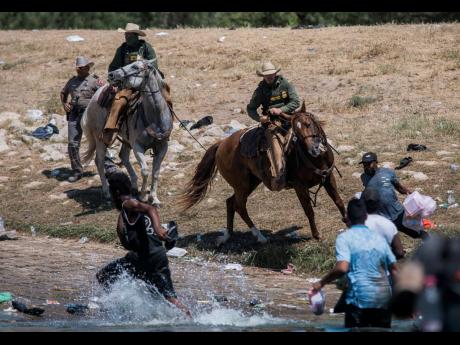 AP
US Customs and Border Protection mounted officers attempt to contain migrants as they cross the Rio Grande from Ciudad Acuña, Mexico, into Del Rio, Texas, on Sunday.

The sight of United States Border Protection agents on horsebacks and using whips to round up Haitian migrants on the Texas border has prompted an outcry by Caribbean elected and others leaders to urge the Biden administration to develop a more humane plan regarding Haitian migrants.

New York State Senator Leroy Comrie said that the actions of the Biden administration to repatriate Haitians, who are desperately seeking refuge from an unstable nation facing political and economic instability, are deplorable.

“Having recently experienced a major earthquake, the assassination of its leader, and still suffering from the ravages of a global pandemic, the needs of Haitians seeking asylum are many. There is no clear reason to explain why the federal government would admit 50,000 Afghans who are similarly suffering, but would seek to turn away an estimated 14,000 Haitians seeking assistance,” he said.

The Jamaica-born state legislator said that reports indicate that these are indigent families who have no jobs, safe places to live or any real hope that their communities will be rebuilt anytime soon. “The opportunity to come to America to seek a new life, to contribute to the fabric of society and escape the harsh realities of their homeland should be something that we embrace.”

Jamaica-born State Assemblywoman in Georgia, Donna McLeod, said the horror of the images coming out of Texas – men on horseback using whips – conjured up all kinds of pain.

“The treatment of Haitians who are facing a humanitarian crisis has not gotten the same treatment as others facing the same predicament and these images degraded these human beings. The Biden administration must make it clear that this will never happen again and a real policy must be developed to handle these types of humanitarian issues,” she said.

Congresswoman Yvette Clarke, chair of the Congressional Black Caucus Immigration Task Force called for the immediate halting of Haitian repatriation flights and emphasised the need for a comprehensive pathway to citizenship

“More than 14,000 Haitians will be expelled from the United States in the coming weeks, and it is unconscionable that the DHS (Department of Homeland Security) would seek to return Haitian immigrants to a country in turmoil. I am calling for a humanitarian memoratorium on these targeted deportations. Now more than ever, we must re-imagine the immigration system in a humane way that is just and fair,” said Clarke

Chair of the Florida Democratic Party, the state with the second-largest number of Haitians in the United States, Manny Diaz, said he was appalled at the photos and videos that have been published by national media, and shared online, showing the mistreatment of Haitian migrants at the hands of border patrol agents on horseback

“The kind of violence these images portray shocks the conscience and is wholly inappropriate in the context of any type of law enforcement in our country.

“These images of horse-riding enforcers menacing, charging at and wrangling people of colour are filled with the insidious and nauseating echoes of some of the darkest chapters in our country’s history, and they have no place in America in the 21st century,” he said.

Diaz, who is of Cuban extract, said “Let me say unequivocally, the actions of these officers were categorically unacceptable. I am heartened to hear the Department of Homeland Security is pledging to conduct a swift and full investigation of these incidents. We must ensure that this type of violence and humiliation is no longer visited upon any immigrant or asylum seeker.”

Dr Karen Green, Jamaica-born vice-chair of the Florida Democratic Party, said that the images shown of Haitian immigrants being treated in the manner depicted has no place in a civilised society.

She, like her fellow Caribbean elected leaders, said that a more humane way must be developed to deal with the problem at the southern border.

“I question who is behind this surge. How did they get there? Who is funding the surge? And are all the immigrants at the Texas border Haitians?” she asked.

Sophia Nelson, president of the Caribbean American Democratic Club and Caucus, said that as a black immigrant, it is disheartening to see fellow Caribbean immigrants being treated in the manner the photos depicted.

“The United States should find a way to treat with the migrant situation in a more wholesome manner,” she said.

She has called on the Biden administration to put in place a policy that will protect Haitians and others seeking asylum in the United States. She further called on the US government to fix the problems in Haiti before sending back Haitian migrants to that country.

Dr Karren Dunkley, a community leader in the Northeast USA, said that as the United States expels hundreds of Haitians, it was disheartening to see agents on horseback using what appeared to be whips, and their horses, to push back migrants.

“The assassination of Haitian President Jovenel Moise, coupled with the recent earthquake and intractable social, political and economic challenges, made the decision to expel Haitian immigrants unconscionable. Haiti is experiencing a humanitarian crisis,” she said.

She called on the Biden administration to repeal Title 42 immediately and develop an action plan that is compassionate, practical, and amiable to the plight of Haitians.