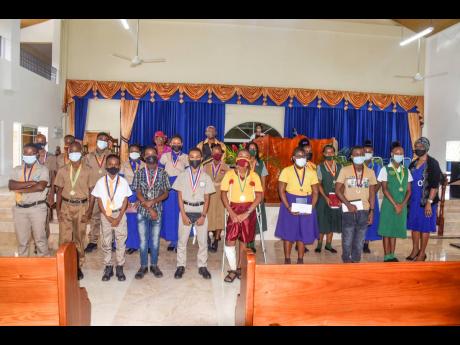 Twenty students drawn from five primary schools in St Catherine were awarded equal shares of a donation of $200,000 from the Beecher Foundation on October 2.

The awards of $10,000, along with a medal and copy of the Bible, was in recognition for commendable academic performance.

Claude Beecher, who heads the Beecher Foundation, said the charity has benefited more than 500 persons during its 18 years in existence.

“We always use the church for our award functions as it gives guidance and direction through the prayer and dedication,” he said.

Beecher said that donations were financed by sponsors who were inspired to give back and encourage students, teachers, and parents.

“I think that it is a great gesture on the part of the Beechers to encourage the students with these donations. It does help,” said Karleen Fuller, a parent.

Jericho Primary School’s Casey Grant, who delivered the vote of thanks, was effusive with praise for the benefactors.

“It is a great feeling to have persons looking out for students who work hard,” Grant said. “I want to say thanks to my parents and teachers and also the donors, but most of all to God for his mercies.’’

The Beecher Foundation is led by Claude and his wife, Pauline. The foundation has been assisting students of eight schools with various programmes.

This year’s activities will continue on October 14 in Charlemont, St Catherine, where five students will be awarded for excellence.