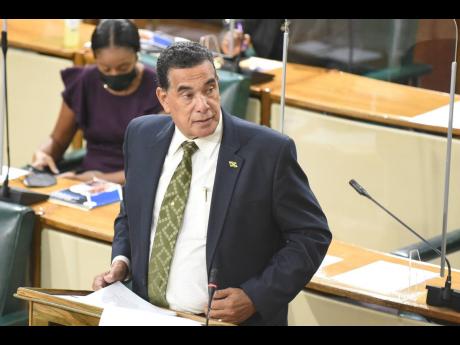 Member of Parliament (MP) for St James Southern Homer Davis wants an independent water czar to be appointment and given the mandate to monitor water systems which are owned and managed by the National Water Commission (NWC), in order to ensure better service, especially for rural customers.

The former mayor of Montego Bay was contributing to the Constituency Debate in Parliament last Tuesday, when he called out the NWC and the Jamaica Public Service Company (JPS) for decades of neglect.

Declaring that he was on a mission to make his constituency a model for the entire country, Davis vowed to focus on the needs of his constituents and serve them without a shred of political colour or interference.

To this end, work has begun to upgrade several water systems where the asbestos and galvanised pipes which were laid to bring water to residents, have fallen into disrepair, due in part to neglect by the NWC.

Quoting the NWC tagline, ‘Water is Life’, Davis said that restoring these systems will ensure that life returns to the communities. “Completion of these projects will put an end to people walking miles to collect a jug of water,” he added.

“I use this platform to recommend that a water czar be appointed to monitor water sources which are owned and managed by the National Water Commission, especially in rural Jamaica, where it is most difficult to maintain a proper water supply system and where most of these systems have fallen into disrepair,” Davis charged.

“It is full time the National Water Commission and its operatives start paying keen attention to the rural areas where their infrastructure is located.”

The MP next turned to the JPS, which he said is in the process of installing the Residential Automated Metering Infrastructure system in the Copperwood area of Bickerstet to ensure a more reliable power supply to the residents.

“Through a partnership with the Jamaica Social Investment Fund (JSIF), we are ensuring that 100 households are properly wired and certified by the government electrical inspector, on order to receive electricity.

Despite this, Davis said he was still not pleased with the performance of the JPS in some communities where, oftentimes, its infrastructure falls into disrepair, and, despite many reports, often takes months, and in some cases, years to be addressed.

“These issues include rotten, broken and leaning poles and malfunctioning street lights. With Government still owning 20 per cent of the JPS, pressure must be brought to bear on the company to perform to its optimum, especially since it is common knowledge that Government has paid JPS all its outstanding street light bills. Hence, better service is required.”

In giving an update on water improvement projects for the constituency, Davis said that at the Grandy Water Supply System in Stonehedge, a new pump was installed and water lines are being repaired and relaid, through a partnership between the NWC and the Rural Water Supply Limited.

In addition, the tender process for the long-awaited multimillion-dollar water supply scheme, which will take water from Shettlewood in Hanover to Anchovy, was recently completed by the JSIF. Upon completion, it will see an improved water supply to communities such as Bickerstet, Mount Carey, Montpelier, Roehampton, Anchovy, Comfort Hall and Lawson, among others.