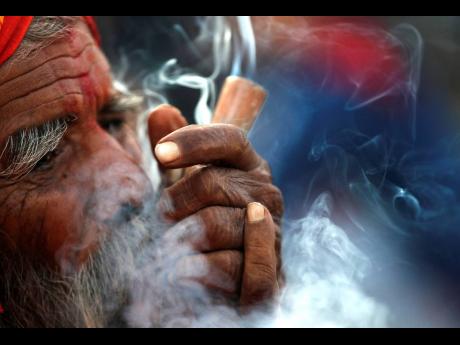 AP
A Hindu holy man smokes marijuana in the courtyard of Pashupatinath temple during the Shivratri festival in Kathmandu, Nepal.

Widely available marijuana once drew thousands of hippies to Nepal, where its use was not only accepted but embedded in both the culture and religion.

But the country followed other nations in outlawing marijuana in the late 1970s and chased away the hippies, who came on buses from Europe and United States.

Half a century later, campaigners are seeking to again legalise the farming, use and export of marijuana as more countries allow its medicinal and recreational use.

Supporters have introduced a bill in parliament that would legalise marijuana, although the debate has been delayed by continuing squabbles between political parties for power.

“We are demanding the legalisation of marijuana in Nepal firstly for medicinal purposes for patients who are dying,” Rajiv Kafle, a campaign leader, said at his ‘Hippie Hill’ retreat in the mountains surrounding the capital, Kathmandu.

Kafle, who lives with HIV, said marijuana helped him cope with pain and kept him away from alcohol and other drugs.

Marijuana use is widely accepted in Nepal. It was freely farmed and attracted Western hippies in the 1960s and 1970s. However, pressure from Western governments made Nepal introduce laws making marijuana and other narcotics illegal.

Some portraits of the most revered Hindu god, Shiva, show him smoking marijuana. Devotees and Hindu holy men are often seen smoking in temples.

It is not difficult to buy marijuana in cities, where there are thousands of users.

“You can see everyone smoking in Nepal, from young kids to old people,” said Polish tourist Lukasz Walendziak.

Kafle and a co-worker at his retreat were detained last month by police and released on bail, but face narcotic distribution charges.

Under the law, anyone possessing marijuana for personal use can be jailed for a month, but distribution and sales are punishable by up to 10 years’ imprisonment, depending on the amount of marijuana seized.

Kafle said the legalisation of marijuana could benefit the country’s economy by attracting tourists, adding that it was the arrival of hippies that brought tourists to Nepal.

“With our low cost of production and the competitive edge we have in the global market for cannabis, we surely are going to win, and this is going to change the country,” he said.