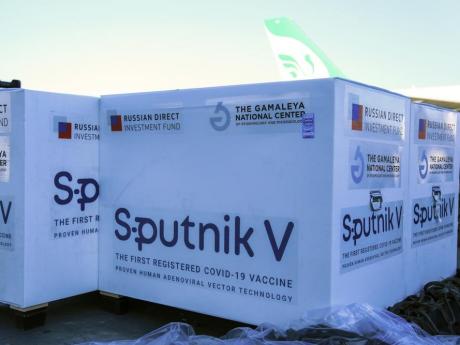 In this February 4, 2021, file photo released by Imam Khomeini Airport City, Russian-made Sputnik V COVID-19 vaccines are unloaded at the Tehran's Imam Khomeini International Airport. Millions from Latin America to the Middle East are waiting for promised doses of the Russian-made Sputnik V coronavirus vaccine due to manufacturing problems and other issues. Virus-battered Iran has received only about 1.3 million doses from Russia out of 60 million doses it had been promised. (Saeed Kaari/IKAC via AP, File)

CARACAS, Venezuela (AP) — Esperita García de Perez got her first vaccination against COVID-19 in May.

That, along with her Catholic faith, made her feel better protected against the virus, and she had hoped to get her second shot of the Russian-developed Sputnik V vaccine a few weeks later.

But the 88-year-old is still waiting.

She was infected with the virus last month, and now her hopes for survival are pinned on the host of medications and home care she is receiving.

Millions in developing nations from Latin America to the Middle East also are waiting for more doses of Sputnik V after manufacturing woes and other issues have created huge gaps in vaccination campaigns.

One firm estimates that Russia has only exported 4.8% of the roughly one billion doses it promised.

The head of the Russian state-controlled fund that invested in the vaccine insisted Wednesday the supply problems have been resolved.

Venezuela, which designated Sputnik for those over 50, ordered 10 million doses in December 2020 but has gotten slightly less than four million.

Argentina, the first country in the Western Hemisphere to administer Sputnik, got its first shipment on December 25 but it is still waiting for many of the 20 million it purchased.

Launched in August 2020 and proudly named after the world's first satellite to symbolise Russia's scientific prowess, Sputnik V has been approved in some 70 countries.

Russian state media earlier this year broadcast triumphant reports about it “conquering the world” as Moscow aggressively marketed it after wealthy nations kept supplies of Western-developed vaccines for themselves.

For a while it was “the only game in town,” said Judy Twigg, a professor specialising in global health at Virginia Commonwealth University, but adds that Russia's window of opportunity “to really stake a claim as the saviour” in the pandemic is gone.

Unlike other COVID-19 vaccines, Sputnik's first and second shots are different and not interchangeable.

Manufacturing in Russia has been marred by reports of production difficulties, particularly in making its second component. Experts have pointed to limited production capacity as well as the fact that the process is very complicated.

Sputnik is a viral vector vaccine, which uses a harmless virus that carries genetic material to stimulate the immune system.

Manufacturers can't guarantee stable output because working with biological ingredients involves a lot of variables in terms of the quality of the finished product.