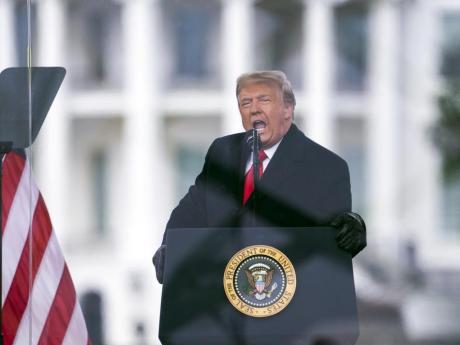 In this January 6, 2021, file photo, President Donald Trump speaks during a rally protesting the electoral college certification of Joe Biden as President in Washington. Trump has filed a lawsuit to block the release of documents to the January 6 select committee, challenging the decision of President Joe Biden to release them. Trump claims in the lawsuit that the request "is almost limitless in scope," and seeks records with no reasonable connection to that day. (AP Photo/Evan Vucci, File)

WASHINGTON (AP) — Former President Donald Trump on Monday sought to block the release of documents related to the January 6 insurrection to the congressional committee investigating the attack, challenging the decision of President Joe Biden.

In a federal lawsuit, Trump said the committee request was “almost limitless in scope,” and sought records with no reasonable connection to that day.

He alleged the committee is seeking potentially millions of presidential records that he asserts are covered by a broad range of privileges, including those that cover presidential communications and conversations between lawyers and a client.

The committee's request was a “vexatious, illegal fishing expedition,” unprecedented in scope and “untethered from any legitimate legislative purpose,” the lawsuit said.

The lawsuit takes aim at the core oversight functions of Congress, saying the records being sought by lawmakers are not for “legitimate legislative purposes” and the committee does not have the powers of a law enforcement agency.

It seeks an injunction to bar the archivist from producing them.

Biden has said he would not block the release to the committee, because the January 6 attack was such an unprecedented event that executive privilege should not factor in.

Lawmakers are seeking the documents as part of its investigation into how a mob of Trump supporters stormed the Capitol building on January 6 in an effort to halt the certification of Biden's win.

The committee demanded a broad range of executive branch papers related to intelligence gathered before the attack, security preparations during and before the siege, the pro-Trump rallies held that day and Trump's false claims that he won the election, among other matters.

Trump's lawsuit says the “boundless requests included over fifty individual requests for documents and information, and mentioned more than thirty individuals, including those working inside and outside government.”

The suit says the request could include “conversations with (or about) foreign leaders, attorney work product, the most sensitive of national security secrets, along with any and all privileged communications among a pool of potentially hundreds of people.”

The lawsuit was filed by Jesse Binnall, an attorney based in Alexandria, Virginia, who represented Trump in an unsuccessful lawsuit late last year seeking to overturn Biden's victory in Nevada.

Trump and his allies have continued to make baseless claims about voter fraud in the 2020 election.