Gang seeks $1m each for kidnapped US missionaries 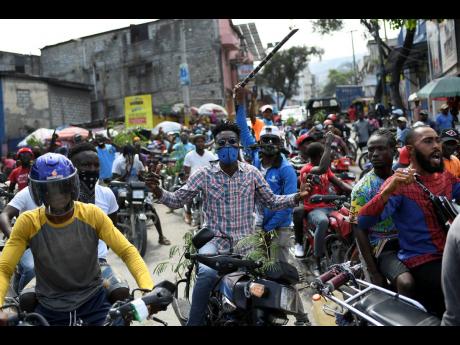 AP
Motorcyclists unable to find gas for sale at a gas station ride in protest to the home of acting Prime Minister Ariel Henry in Port-au-Prince, Haiti, yesterday, on the day of a strike against rising violence.

A gang that kidnapped 17 members of a US-based missionary group is demanding $1 million ransom per person, although authorities are not clear whether that includes the five children being held, a top Haitian official told The Associated Press on Tuesday.

The official, who wasn’t authorised to speak to the press, said someone from the 400 Mawozo gang called a ministry leader shortly after kidnapping the missionaries on Saturday and demanded the ransom. A person in contact with the organisation, Christian Aid Ministries, also confirmed the $1 million per person demand, which was first reported by The Wall Street Journal. That source spoke on condition of anonymity due to the sensitivity of the situation.

The ages of the adults being held captive range from 18 to 48, while the children are eight months, three years, six years, 13 years and 15 years, according to a statement from the organisation on Tuesday. Sixteen of the abductees are Americans and one Canadian.

“This group of workers has been committed to minister throughout poverty-stricken Haiti,” the Ohio-based ministry said, adding that the missionaries were most recently working on a rebuilding project to help those who lost their homes in the magnitude 7.2 earthquake that struck on August 14.

The group was returning from visiting an orphanage when they were abducted, the organisation said.

A recent wave of kidnappings prompted a protest strike that shuttered businesses, schools and public transportation starting Monday in a new blow to Haiti’s anaemic economy. Unions and other groups vowed to continue the shutdown indefinitely as an ongoing fuel shortage worsened, with businesses blaming gangs for blocking roads and gas distribution terminals.

On Tuesday, hundreds of motorcycles zoomed through the streets of Port-au-Prince as the drivers yelled, “If there’s no fuel, we’re going to burn it all down!”

One protest took place near the prime minister’s residence, where police fired tear gas to disperse the crowd that demanded fuel.

In Washington, White House press secretary Jen Psaki said Tuesday that “the FBI is a part of a coordinated US government effort to get the US citizens involved to safety”, with the American Embassy in Port-au-Prince coordinating with local officials and families of those seized.

“Kidnapping is widespread and victims regularly include US citizens. We know these groups target US citizens who they assume have the resources and finances to pay ransoms, even if that is not the case,” she added, noting that the government has urged citizens not to visit Haiti.

She confirmed it is US policy not to negotiate with those holding hostages, but declined to describe details of the operation.

The kidnapping was the largest reported of its kind in recent years, with Haitian gangs growing more brazen and abductions spiking as the country tries to recover from the July 7 assassination of President Jovenel Moïse and the earthquake that hit southern Haiti and killed more than 2,200 people.