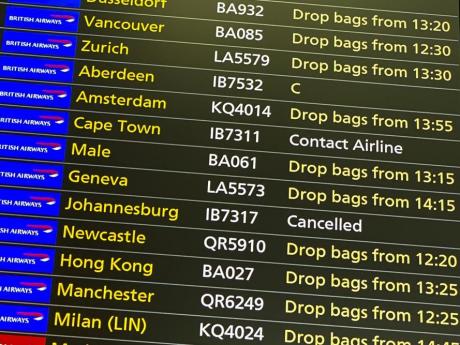 A departures screen displays a cancelled flight to Johannesburg and a message to contact the airline for a scheduled flight to Capetown, at London's Heathrow Airport, Friday, Nov. 26, 2021.

BRUSSELS (AP) —
The discovery of a new coronavirus variant sent a chill through much of the world Friday as nations raced to halt air travel, markets fell sharply and scientists held emergency meetings to weigh the exact risks, which were largely unknown.

Medical experts, including the World Health Organisation, warned against any overreaction before the variant that originated in southern Africa was better understood.

But a jittery world feared the worst nearly two years after COVID-19 emerged and triggered a pandemic that has killed more than 5 million people around the globe.

There was no immediate indication whether the variant was more transmissible or causes more severe disease.

As with other variants, some infected people display no symptoms, South African experts said.

Even though some of the genetic changes appear worrisome, it was unclear if the new variant would pose a significant public health threat. Some previous variants, like the beta variant, initially concerned scientists but did not spread very far.

The 27-nation European Union imposed a temporary ban on air travel from southern Africa, and stocks tumbled in Asia, Europe and the United States.

The price of oil plunged nearly 12 per cent.

“The last thing we need is to bring in a new variant that will cause even more problems,” German Health Minister Jens Spahn said.

The member nations of the EU have experienced a massive spike in cases recently.

EU Commission President Ursula von der Leyen said flights will have to be suspended until there is a clear understanding about the danger posed by this new variant, and travellers returning from this region should respect strict quarantine rules.

Belgium became the first European Union country to announce a case of the variant.