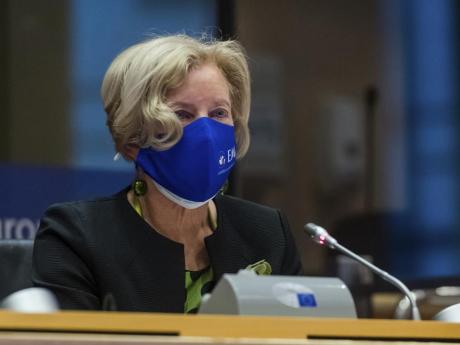 BRUSSELS (AP) — The European Union's medical agency chief said Tuesday that it is ready to deal with the new omicron variant and that it will take two weeks to have an indication of whether the current COVID-19 vaccines will be able to deal with it.

Emer Cooke, the Executive Director of the European Medicines Agency, said that if it does require a new vaccine to counter omicron, it will take up to four months to have it approved for use in the 27-nation bloc.

“We are prepared,” Cooke told EU lawmakers, adding that cooperation with the medical industry is already ongoing to prepare for such an eventuality.

“We know that at some stage there will be a mutation that means we have to change the current approach.”

Cooke sounded more reassuring than the World Health Organization, which warned Monday that the global risk from the omicron variant is “very high,” saying the mutated coronavirus could lead to surges with “severe consequences.”

A widening circle of countries around the world have reported cases of the variant or have moved to restrict flights while scientists race to figure out just how dangerous the mutant version might be.

The highest intensity of the omicron variant has been reported in and around the South African cities of Johannesburg and Pretoria.

Cooke said that the European makeup of an older population and higher vaccination levels would make for a different situation altogether.

Cooke said that it was important to assess “the cross-neutralisation” of the vaccines to see if they do provide protection against the new variant.

“That's a process that takes about two weeks.”

So far, the vaccines have been able to deal with all variants they came across, she said. She added that if there was a need to adapt the vaccines, “I want to assure you that we're working with the companies and with other regulators to make sure that we're as prepared and ready as possible.”

“Were there a need to change the existing vaccines, we could be in a position to have those approved within three to four months,” she said.