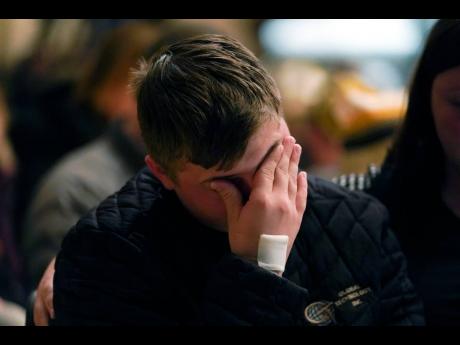 Paul Sancya
Aiden Watson, who was injured at Oxford High School, attends a vigil at LakePoint Community Church in Oxford, Michigan on Tuesday.

A 15-year-old boy was charged Wednesday with murder, terrorism and other crimes for a shooting that killed four fellow students and injured others at a Michigan high school.

Oakland County prosecutor Karen McDonald did not reveal a possible motive for Tuesday’s violence at Oxford High School and declined to comment when pressed about whether she believed the victims were specifically targetted. But she said the shooting was premeditated, based in part on a “mountain of digital evidence” collected by police.

Sheriff Mike Bouchard later told reporters that the boy’s parents had been summoned to the school before the violence. Bouchard wouldn’t discuss details of the behaviour school officials were concerned about. The teen, Ethan Crumbley, who is now charged as an adult with murder, attempted murder and terrorism causing death, was in the meeting with his parents, Bouchard said.

“There is nothing that he could have faced that would warrant senseless, absolutely brutal violence on other kids,” he said.

Ethan Crumbley is accused of firing a semi-automatic handgun in a school hallway, roughly 30 miles (50 kilometres) north of Detroit. At least seven other people were injured.

“This was not just an impulsive act,” McDonald said.

The shooting should be a wake-up call for new gun laws in a country that has become “desensitised to school shootings,” McDonald told reporters.

“We have to do better,” McDonald said without offering specific changes. “How many times does this have to happen? How many times?”

The charges were announced a few hours after investigators reported that a fourth student had died.

“What about all the children who ran, screaming, hiding under desks? ... Those are victims, too, and so are their families and so is the community. The charge of terrorism reflects that,” the prosecutor said.