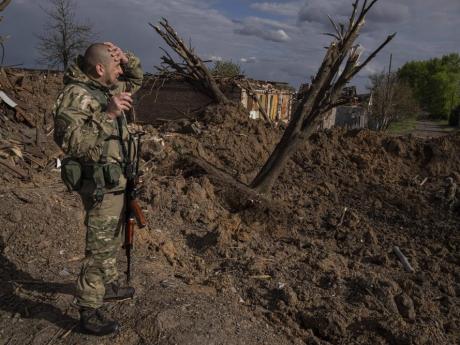 A Ukrainian serviceman inspects a site after an airstrike by Russian forces in Bahmut, Ukraine, Tuesday, May 10, 2022. (AP Photo/Evgeniy Maloletka)

ZAPORIZHZHIA, Ukraine (AP) — Ukraine's top prosecutor disclosed plans Wednesday for the first war crimes trial of a captured Russian soldier, as fighting raged in the east and south and the Kremlin left open the possibility of annexing a corner of the country it seized early in the invasion.

Prosecutor General Iryna Venediktova said her office charged Sergeant Vadin Shyshimarin, 21, in the killing of an unarmed 62-year-old civilian who was gunned down while riding a bicycle in February, four days into the war.

Shyshimarin, who served with a tank unit, was accused of firing through a car window on the man in the northeastern village of Chupakhivka.

Venediktova said the soldier could get up to 15 years in prison. She did not say when the trial would start.

Venediktova's office has said it has been investigating more than 10,700 alleged war crimes committed by Russian forces and has identified over 600 suspects.

Many of the alleged atrocities came to light last month after Moscow's forces aborted their bid to capture Kyiv and withdrew from around the capital, exposing mass graves and streets and yards strewn with bodies in towns such as Bucha. Residents told of killings, burnings, rape, torture and dismemberment.

Volodymyr Yavorskyy of the Center for Civil Liberties said the Ukrainian human rights group will be closely following Shyshimarin's trial to see if it is fair.

“It's very difficult to observe all the rules, norms and neutrality of the court proceedings in wartime,” he said.