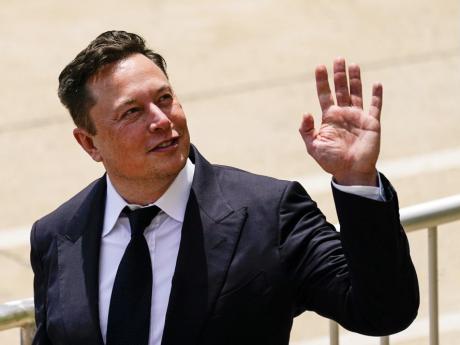 CEO Elon Musk departs from the justice centre in Wilmington, Delaware, Tuesday, July 13, 2021. Musk says his planned $44 billion purchase of Twitter is "temporarily on hold" pending details on spam and fake accounts on the social media platform. The announcement that the Tesla billionaire tweeted Friday, May 13, 2022, is another twist amid signs of internal turmoil over his planned buyout of Twitter. (AP Photo/Matt Rourke, File)

DETROIT (AP) — Elon Musk said Friday that his plan to buy Twitter is “temporarily on hold” as he tries to pinpoint the exact number of spam and fake accounts on the social media platform, another twist amid signs of turmoil over the proposed $44 billion acquisition.

Musk has been vocal about his desire to clean up Twitter's problem with “spam bots” that mimic real people and appeared to question whether the company was underreporting them.

In a tweet, the Tesla billionaire linked to a Reuters story from May 2 about a quarterly report from Twitter that estimated false or spam accounts made up fewer than 5% of the company's “monetizable daily active users” in the first quarter.

“Twitter deal temporarily on hold pending details supporting calculation that spam/fake accounts do indeed represent less than 5% of users,” Musk said, indicating he's sceptical that the number of inauthentic accounts is that low.

It wasn't clear whether the issue could scuttle the deal. Musk later tweeted that he's “still committed to acquisition.”

The issue of fake accounts on Twitter is not a secret.

In its quarterly filing with the SEC, even Twitter doubted that its count of bot accounts was correct, conceding that the estimate may be low. “In making this determination, we applied significant judgment, so our estimation of false or spam accounts may not accurately represent the actual number of such accounts, and the actual number of false or spam accounts could be higher than we have estimated,” the filing says.