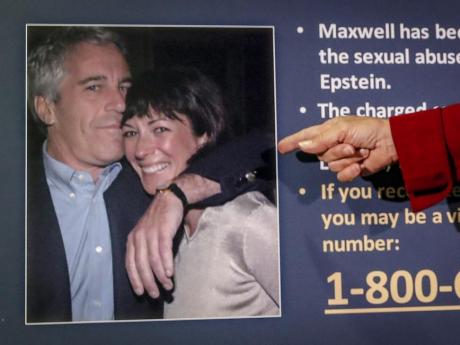 Audrey Strauss, acting US attorney for the Southern District of New York, points to a photo of Jeffrey Epstein and Ghislaine Maxwell during a news conference in New York on July 2, 2020. (AP Photo/John Minchillo, File)

NEW YORK (AP) — Ghislaine Maxwell, the jet-setting socialite who once consorted with royals, presidents and billionaires, was sentenced to 20 years in prison Tuesday for helping the financier Jeffrey Epstein sexually abuse underage girls.

The stiff sentence was the punctuation mark on a trial that explored the sordid rituals of a predator power couple who courted the rich and famous as they lured vulnerable girls as young as 14, and then exploited them.

Prosecutors said Epstein, who killed himself in 2019 while awaiting trial, sexually abused children hundreds of times over more than a decade, and couldn't have done so without the help of Maxwell, his longtime companion and onetime girlfriend who they said sometimes also participated in the abuse.

In December, a jury convicted Maxwell of sex trafficking, transporting a minor to participate in illegal sex acts and two conspiracy charges.

US District Judge Alison J. Nathan, who also imposed a $750,000 fine, said “a very significant sentence is necessary” and that she wanted to send an “unmistakable message” that these kinds of crimes would be punished.

Prosecutors had asked the judge to give her 30 to 55 years in prison, while the 60-year-old Maxwell's defence sought a lenient sentence of just five years.

Maxwell, wearing a blue prison uniform and a white mask to conform with coronavirus rules, looked to one side as the sentence was announced, but otherwise did not react.

“We will continue to live with the harm she caused us,” said Annie Farmer, one of the four accusers who testified against Maxwell at trial, inside the courtroom before the sentencing.

When she had a chance to speak, Maxwell said she empathised with the survivors and that it was her “greatest regret of my life that I ever met Jeffrey Epstein.”

Maxwell called him “a manipulative, cunning and controlling man who lived a profoundly compartmentalised life,” echoing her defence attorneys' assertions that Epstein was the true mastermind.

Maxwell, who denies abusing anyone, said she hoped that her conviction and her “unusual incarceration” bring some “measure of peace and finality.”