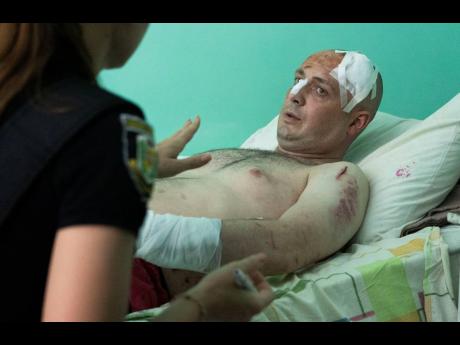 Efrem Lukatsky
A police officer writes a report as a man wounded by the Russian deadly rocket attack at a shopping centre tells her about the attack in a city hospital in Kremenchuk in Poltava region, Ukraine yesterday.

France’s president denounced Russia’s fiery airstrike on a crowded shopping mall in Ukraine as a “new war crime” Tuesday and vowed the West’s support for Kyiv would not waver, saying Moscow “cannot and should not win” the war.

The strike, which killed at least 18 people in the central city of Kremenchuk, came as leaders from the Group of Seven (G-7) nations met in Europe. It was part of an unusually intense barrage of Russian fire across Ukraine, including in the capital, Kyiv, that renewed international attention as the war drags on.

Speaking at the end of the G-7 summit in Germany, French President Emmanuel Macron appeared to address that concern, vowing that the seven leading industrialised democracies would support Ukraine and maintain sanctions against Russia “as long as necessary, and with the necessary intensity”.

“Russia cannot and should not win,” he said. He called Monday’s attack on the mall “a new war crime”.

As they have in other attacks, Russian officials claimed the shopping centre was not the target.

In a virtual address to the UN Security Council, Ukrainian President Volodymyr Zelenskyy accused Russian President Vladimir Putin of being a “terrorist” and called for Russia to be expelled from the United Nations. He also urged the UN to establish an international tribunal to investigate Russia’s action in Ukraine.

Zelenskyy ended his address by asking all in the chamber to stand in silent tribute to the “tens of thousands” of Ukrainian children and adults killed in the war. All council members rose, including Russia’s deputy UN ambassador Dmitry Polyansky.

How to counter Russia and back Ukraine will also be the focus of a summit this week of the NATO alliance, whose support has been critical to Kyiv’s ability to fend off Moscow’s larger and better equipped forces. Ukrainian leaders, however, say they need more and better weapons if they are to hold off and even drive back Russia, which is pressing an all-out assault in Ukraine’s eastern Donbas region.

As Macron spoke, rescuers combed through the charred rubble of the shopping mall, which officials said was struck when more than 1,000 afternoon shoppers and workers were inside.