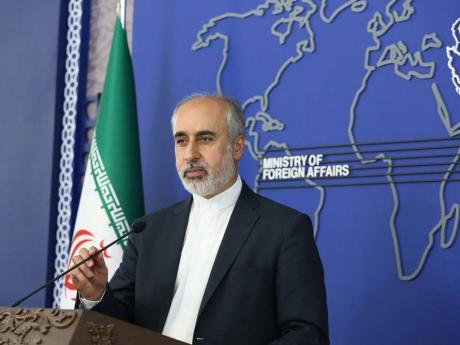 DUBAI, United Arab Emirates (AP) — An Iranian official Monday denied Tehran was involved in the stabbing of author Salman Rushdie, though he sought to justify the attack in the Islamic Republic's first public comments on the bloodshed.

The remarks by Nasser Kanaani, the spokesman for Iran's Foreign Ministry, came three days after Rushdie was wounded in New York state.

The writer has been taken off a ventilator and is “on the road to recovery,” according to his agent.

Rushdie, 75, has faced death threats for more than 30 years over his novel “The Satanic Verses,” whose depiction of the Prophet Muhammad was seen by some Muslims as blasphemous.

In 1989, Iran's supreme leader, Ayatollah Ruhollah Khomeini, issued a fatwa, or Islamic edict, demanding the author's death, and while Iran has not focused on Rushdie in recent years, the decree still stands.

Also, a semiofficial Iranian foundation had posted a bounty of over $3 million for the killing of the author.

It has not commented on the attack.

“Regarding the attack against Salman Rushdie in America, we don't consider anyone deserving reproach, blame or even condemnation, except for (Rushdie) himself and his supporters,” Kanaani said.

“In this regard, no one can blame the Islamic Republic of Iran,” he added. “We believe that the insults made and the support he received was an insult against followers of all religions.”

Iran has denied carrying out other operations abroad against dissidents in the years since the country's 1979 Islamic Revolution, though prosecutors and Western governments have attributed such attacks to Tehran.

Rushdie was attacked Friday as he was about to give a lecture in western New York. He suffered a damaged liver and severed nerves in an arm and an eye, according to his agent, Andrew Wylie. Rushdie is likely to lose the eye, Wylie said.