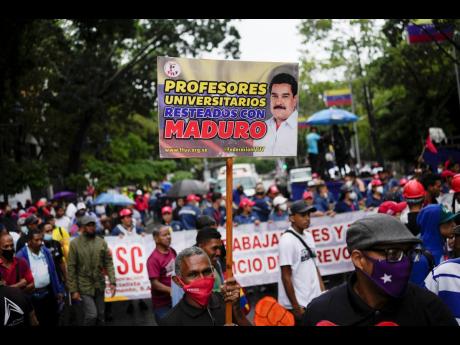 AP
A teacher holds a sign that reads in Spanish, ‘University professors stand firm with Maduro’, referring to President Nicolas Maduro, during a pro-government protest by public workers demanding the government pay their full benefits and respect collective bargaining agreements, in Caracas, Venezuela, on Wednesday, August 10.

Public-school teachers across Venezuela had planned to use their annual vacation bonus to buy uniforms for their children, waterproof leaky roofs, get new prescription glasses or fix the pair barely held together by adhesive tape.

Some expected to get US$100, while others calculated a little more or less, depending on their years of service and advanced degrees, though only a small number thought they would get around US$200.

The government, however, paid them only a tiny fraction of that.

So, a few days into their long break, teachers have been marching by the thousands around the country, threatening to strike when school resumes, or possibly even to abandon their profession.

“Right now, I don’t even have a pencil for my children to start classes in September,” said Florena Delgado, who teaches first and fifth grades at two schools in one of the lowest-income neighbourhoods of the capital, Caracas.

She also makes cake toppers, creates balloon decorations, and sells clothes to supplement her government pay. Unless something changes, “I don’t plan to join classes, and well, let it be what God wants,” she says.

In response to the unrest, the government announced on Friday through a lawmaker that it will pay the bonus in full this week. But Venezuela’s teachers are long accustomed to seeing televised economic promises that aren’t kept, so they are waiting until they get their money before changing course.

Elementary and high-school educators in the crisis-wrecked country on average earn about US$50 a month, ranking among the lowest paid in Latin America. The government pays them a vacation bonus in a single payment at the end of every school year in July.

The National Budget Office based this year’s bonus on the US$1.52 monthly minimum wage of 2021, instead of the US$30 rate that took effect in April. The government also paid teachers only 25 per cent of the unexpectedly low bonus, and did not set a date to disburse the rest.

The budget office defended the calculation, arguing that a new labour agreement has not been signed. But by Friday, National Assembly member Orlando Pérez, who is president of one of the country’s teachers unions, said the government will pay teachers their full bonus as required by Venezuela’s labour law, which sets them based on the latest salaries.

Outside the offices of the Ministry of Education, teachers and college professors, who also earn meagre wages and feel short-changed over their vacation bonus, have demanded the dismissal of the agency’s leader. Some teachers said they didn’t even get the 25 per cent payment.

Protesting teachers have been joined by other workers, including the traditionally government loyalists at the state-owned oil company, Petróleos de Venezuela. Red T-shirts long associated with the governing United Socialist Party of Venezuela were in abundance at one protest, in which workers from the health, cement and electric sectors expressed support for the teachers’ demands.

President Nicolás Maduro has not commented on the teachers’ complaints, angering some of them.