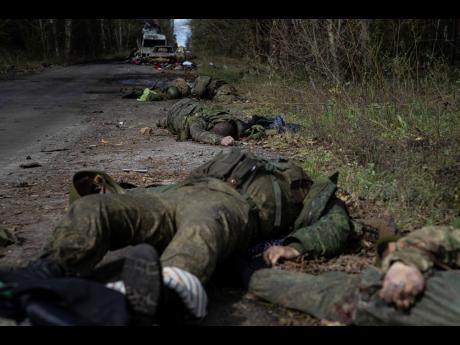 AP
Dead bodies of Russian servicemen lie on the ground in recently recaptured town of Lyman, Ukraine, on Monday.

Russian troops abandoned a key Ukrainian city so rapidly that they left the bodies of their comrades in the streets, offering more evidence Tuesday of Moscow’s latest military defeat as it struggles to hang on to four regions of Ukraine that it illegally annexed last week.

Meanwhile, Russia’s upper house of parliament rubber-stamped the annexations following “referendums” that Ukraine and its Western allies have dismissed as fraudulent.

Responding to the move, Ukrainian President Volodymyr Zelenskyy formally ruled out talks with Russia, declaring that negotiations with Russian President Vladimir Putin are impossible after his decision to take over the regions.

The Kremlin replied by saying that it will wait for Ukraine to agree to sit down for talks, noting that it may not happen until a new Ukrainian president takes office.

“We will wait for the incumbent president to change his position or wait for a future Ukrainian president who would revise his stand in the interests of the Ukrainian people,” Kremlin spokesman Dmitry Peskov said.

Despite the Kremlin’s apparent political bravado, the picture on the ground underscored the disarray Putin faces amid the Ukrainian advances and attempts to establish new Russian borders.

Over the weekend, Russian troops pulled back from Lyman, a strategic eastern town that the Russians had used as a logistics and transport hub, to avoid being encircled by Ukrainian forces. The town’s liberation gave Ukraine an important vantage point for pressing its offensive deeper into Russian-held territories.

Two days later, an AP team reporting from Lyman saw at least 18 bodies of Russian soldiers still on the ground. The Ukrainian military appeared to have collected the bodies of their comrades after fierce battles for control of the town, but they did not immediately remove those of the Russians.

“We fight for our land, for our children, so that our people can live better, but all this comes at a very high price,” said a Ukrainian soldier who goes by the nom de guerre Rud.

Lyman residents emerged from basements where they had hidden during the battle and built bonfires for cooking. The city has had no water, electricity or gas since May. Residential buildings were burned. A few people emerged on bicycles.