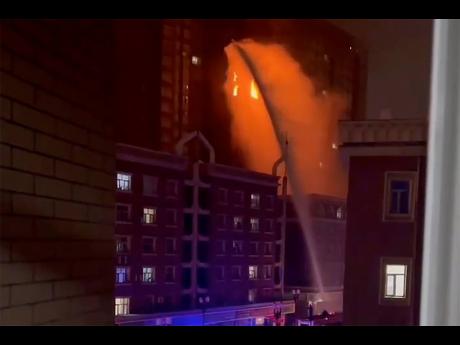 AP
In this image taken from video, firefighters spray water on a fire at a residential building in Urumqi in western China’s Xinjiang Uyghur Autonomous Region on Thursday.

A fire in an apartment building in northwestern China’s Xinjiang region killed 10 people and injured nine, authorities said Friday, amid stringent lockdowns that have left many residents in the area stuck in their homes for more than three months.

The fire broke out Thursday night in the regional capital of Urumqi where temperatures have dropped below freezing after dark.

Flames spread upward from the 15th floor to the 17th floor, with smoke billowing up to the 21st floor, according to multiple state media reports. The blaze took around three hours to be extinguished.

The deaths and injuries were caused by inhalation of toxic fumes, with those taken to the hospital all expected to survive, the reports said. An initial investigation appeared to show the fire was sparked from a power strip in a bedroom of one of the 15th-floor apartments.

A Uyghur living in exile in Switzerland said he learned from a call with a neighbour that his aunt and four of her children perished in the fire.

“She was a wonderful woman, always thinking of her children and how to treat and educate them well,” Abdulhafız Muhammed Emin said, sobbing during a phone interview. “My heart is really broken, I cannot bear it.”

Xinjiang has been under harsh lockdowns for over three months to combat the spread of the coronavirus under China’s zero-COVID policy. The country has grappled with a wave of cases in recent weeks, causing rolling lockdowns and rigid travel restrictions affecting hundreds of millions of people.

Videos circulated on social media showed an arc of water from a distant fire truck falling short of the fire, sparking waves of angry comments online. Some said fire engines had been blocked by pandemic control barriers or by cars stranded after their owners were put in quarantine, but the reason why the truck was far away was unclear.

Many Xinjiang residents are frustrated with China’s harsh COVID-19 controls. In September, some reported hunger amid spotty food deliveries.

Xinjiang “is an open-air prison” Muhammed Emin said. “The Chinese government doesn’t care about their lives.”

Urumqi Mayor Memtimin Qadir apologised to the city’s residents during a press conference late Saturday and announced the formation of a government team to investigate the fire.