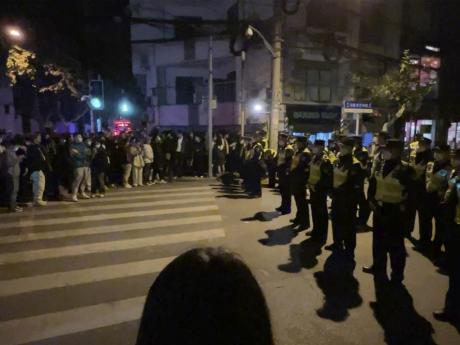 Chinese police officers block off access to a site where protesters had gathered in Shanghai on Sunday, November 27, 2022. Protests against China's strict "zero-COVID" policies resurfaced in Shanghai and Beijing on Sunday afternoon, continuing a round of demonstrations that have spread across the country since a deadly apartment fire in the northwestern city of Urumqi led to questions over such rigid anti-virus measures. (AP Photo)

SHANGHAI (AP) — Protesters pushed to the brink by China's strict COVID measures in Shanghai called for the removal of the country's all-powerful leader and clashed with police Sunday as crowds took to the streets in several cities in an astounding challenge to the government.

Police forcibly cleared the demonstrators in China's financial capital who called for Xi Jinping's resignation and the end of the Chinese Communist Party's rule — but hours later people rallied again in the same spot, and social media reports indicated protests also spread to at least seven other cities, including the capital of Beijing, and dozens of university campuses.

Largescale protests are exceedingly rare in China, where public expressions of dissent are routinely stifled, but a direct rebuke of Xi, the country's most powerful leader in decades, is extraordinary.

Three years after the virus first emerged, China is the only major country still trying to stop transmission of COVID-19 — a “zero COVID” policy that regularly sees millions of people confined to their homes for weeks at a time and requires near-constant testing. The measures were originally widely accepted for minimising deaths while other countries suffered devastating waves of infections, but that consensus has begun to fray in recent weeks.

Then on Friday, 10 people died in a fire in an apartment building, and many believe their rescue was delayed because of excessive lockdown measures. That sparked a weekend of protests, as the Chinese public's ability to tolerate the harsh measures has apparently reached breaking point.