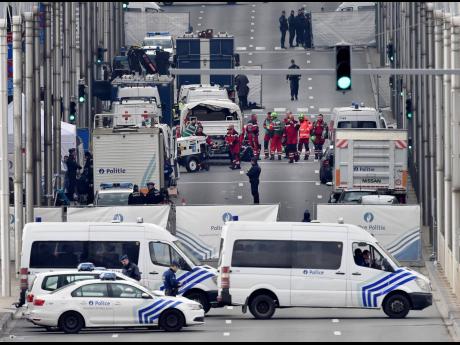 AP
In March 22, 2016 file photo, police and rescue teams are pictured outside the metro station Maelbeek in Brussels. 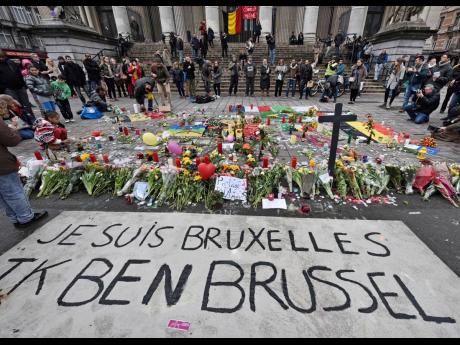 AP
A banner for the victims of the bombings reads “I am Brussels” at the Place de la Bourse in the centre of Brussels, March 23, 2016. The trial of 10 men accused of suicide bombings at Brussels airport and an underground metro station starts in earnest this week.
1
2

Jaana Mettala was six months pregnant and on her way to work when the bomb exploded in the heart of Brussels’ European Union quarter. She suffered severe burns, but Mettala and her baby survived — 32 other people did not.

It’s now more than six years since the deadliest peacetime attacks on Belgian soil. And Mettala yearns for closure as the trial of 10 men accused over the suicide bombings at Brussels airport and an underground metro station starts in earnest Monday.

“I hope that the trial ends with a fair result and we can put this behind us,” Mettala said. “Even if there are after-effects that we will keep forever.”

She is going to testify at the trial, which will be the biggest in Belgium’s judicial history with hundreds of plaintiffs. It is expected to last between six and nine months.

The 10 defendants face charges including murder, attempted murder and membership, or participation in the acts of a terrorist group, over the morning rush hour attacks at Belgium’s main airport and on the central commuter line on March 22, 2016.

If convicted, some of them could face up to 30 years in prison.

Among the accused is Salah Abdeslam, the only survivor among the Islamic State extremists who in 2015 struck the Bataclan theatre in Paris, city cafés and France’s national stadium. He was sentenced to life in prison without parole over the atrocities in the French capital.

He will be joined in the dock by his childhood friend, Mohamed Abrini, who walked away from Brussels’ Zaventem airport after his explosives failed to detonate.

Abrini has been sentenced to life in prison with no possibility of parole for 22 years for charges including complicity to terrorist murder in the Paris attacks trial.

Oussama Atar, who has been identified as a possible organizer of the deadly attacks on both Paris and Brussels, will be tried in absentia. He is believed to have died in the Islamic State’s final months of fighting in Iraq and Syria.

Mettala hopes that facing most of the accused will help her leave behind the anguish.

“It’s a step on the path toward another kind of serenity,” she said. “It will be very, very hard. But I’m not someone trying to avoid difficulty. Because you need confrontation to get stronger.”

In addition to the 32 people who died in Brussels, some 900 were hurt or suffered mental trauma.

The trial at NATO’s former headquarters was initially expected to start in October but was pushed back to allow sufficient time to replace individual glass boxes where the defendants were expected to sit. After defence lawyers argued that they could not consult with their clients and that the boxes make them look like animals in a cage, they have been replaced by one large cubicle shared by the defendants.

The new set-up has been welcomed by lawyers with Life4Brussels, a group supporting victims.

“The defendants were talking to each other (during the jury selection), it’s not a bad thing since it is extremely important for the victims that they are in good condition to explain, to address the court, and answer questions,” said Maryse Alié, a lawyer working with the group.

Because of the delay, the trial now coincides with the beginning of the festive season.

“When you have young children, there is a paradox between the ordeal of this trial and the end of year celebrations” Mettala said. “It’s a bit unfortunate that this is happening right now, in the pre-holiday season.”