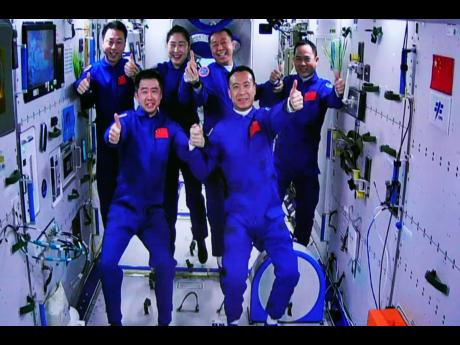 AP
In this photo released by Xinhua News Agency, an image captured off a screen at the Jiuquan Satellite Launch Center in northwest China shows the Shenzhou-15 and Shenzhou-14 crew taking a group picture with their thumbs up after a historic gathering in space November 30.

Three Chinese astronauts landed in a northern desert on Sunday after six months working to complete construction of the Tiangong station, a symbol of the country’s ambitious space programme, state TV reported.

The three astronauts were part of the Shenzhou-14 mission, which launched in June. The Tiangong is part of official Chinese plans for a permanent human presence in orbit.

China in 2003 became the third government to send an astronaut into orbit on its own after the former Soviet Union and the United States.

The government has landed robot probes on the little-explored far side of the moon and on Mars. In 2020, a probe returned lunar rocks to Earth for the first time since the 1970s.

A crew of three Chinese astronauts blasted off Tuesday for Tiangong’s final construction stage. The station’s third and final module docked with the station this month.