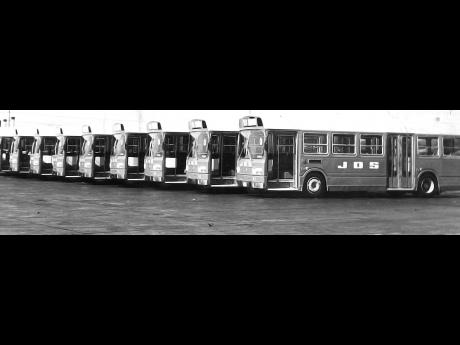 Gleaner photograph
Some of the new JOS buses commissioned in 1972 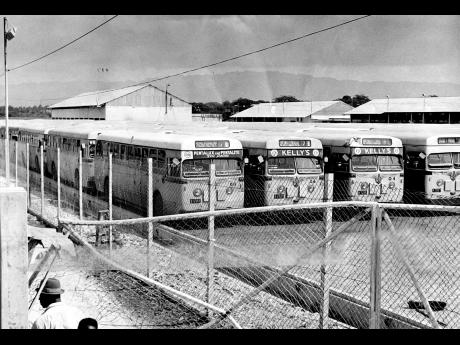 If you grew up in Kingston in the '70s and '80s, you probably know a thing or two about the JOS (Jamaica Omnibus Service).

Looking back, the JOS, called the 'Jolly Joseph', was a cheap and efficient way to get around Kingston. Sometimes, however, one would see riders hanging dangerously off the back steps of buses at rush hour, anxious to get to their destination.

Fares were cheap and they were calculated by zones. In the late '60s, some fares were one cent.

Once in a while, riders bought a one-stage fare and continued riding in the two-fare zone, but the conductor collected the extra fare or politely ejected the rider from the bus.

Catching the last bus was a lucky thrill as the buses did not operate much after midnight. But Kingston was a safe place then, so if one had to walk home, the danger was from barking stray dogs and not from ill-intentioned human hands.

The smaller, older bus was called a patty pan, and the ones going to Rock Hall were not very reliable. Passengers joked that the #33 to Rock Hall would, like the BOAC flight to London, arrive the next day.

High school students who lived at points north of Half-Way Tree in the direction of Havendale, Meadowbrook, and Constant Spring would wait for hours at the bus stop by Aquarius Record Store near the Half-Way Tree clock, jamming to the latest songs on the streets, and declining to board the #3, #30, and #35 buses.

Other popular after-school stops before the bus ride home included the soda fountain at York Pharmacy for a frozen Coke and cotton candy; Skateland, Discoland; and sometimes; at JBC TV on South Odeon Avenue to catch a taping of Schools' Challenge Quiz or the dance show 'Where it's At'.

I always felt sorry for my Ardenne schoolmates who lived in places like Glenhope Avenue, Phoenix Avenue, and Trafalgar Park from where getting to school was a two-minute walk, so they missed out entirely on the thrill and the excitement of riding the JOS on a regular basis.

Once, while waiting for the bus to head home after school on Hope Road, I was offered a ride to Half-Way Tree by then prime minister Hugh Shearer, who was probably coming from his office at Jamaica House across the street.

Looking back, I was probably stranded at the bus stop, and still new to Kingston, blissfully unaware of a bus-service disruption that was triggered when Prime Minister Shearer declared my namesake, Guyanese lecturer Walter Rodney from the University of the West Indies, persona non grata during the Christmas term of 1968. This led to riots across Kingston that crippled the bus service for a few days.

There was plenty of humour, too. Once, a lady visiting from the country was lost in Half-Way Tree near Spencer James Drive trying to find the #22 bus to Mona.

As it happens, the #22 does go to Mona but not from Half-Way Tree. Worried and in despair, the lady asked a group of students to direct her to the bus. One of the boys offered quick advice, "Since the 22 bus is not nearby, the best thing to do is to walk down to Hagley Park Road near the parish church and take two number #11 buses instead of the 22. After assessing the arithmetic, the woman glared at him, kissed her teeth, and walked away.

I was able to connect with some of the former JOS staff members on social media, and they collectively shared some interesting recollections about working for the JOS bus company.

"I worked on those buses for 13 years, and JOS brings back many happy memories," Letoria Haughton, who was a conductor, said. "While there, I plied all the routes until JOS went out of business, and I encountered everything - the good, the bad, the pickpockets, abusive passengers, and the whole nine yards," she added. "Every now and then I dream that I am still plucking those tickets from those wooden racks and carrying cash in those ticket pans."

The JOS buses were metallic grey and dark green, but the colours changed over time as new buses were added to the fleet. The main depot was located on Lyndhurst Road near RJR.

Former staff members said that the longest route was the #33 bus from Parade to Rock Hall, probably followed by the #13, which ran along Slipe Pen Rod, Lyndhurst Road, Maxfield Avenue, and Molynes Road.

The shortest route was the #22A from Downtown to Cross Roads via South Camp Road. Several former riders describe the #22 from Parade to Mona Reservoir as the most scenic route, which was virtually traffic-free, along Old Hope Road, Wellington Drive, and the almost deserted Mona Road.

The terminus for the #22 was located just across from the old stone aqueduct, with the mystical Long Mountain forming a postcard-perfect backdrop by the University of the West Indies campus.

Those travelling to Spanish Town would connect with the Penn Overland, with windows adorned with curtains, that they would catch from York Pharmacy in Half-Way Tree or from downtown.

As Portmore communities grew, so, too, did the JOS bus service in order to accommodate commuters from that side to St Catherine to Kingston.

One former commuter said that at Christmas time, JOS maintained a tradition of putting early pre-dawn buses on key routes to facilitate holiday shoppers who needed to get to Grand Market. "When Chrismus Eve come, you coulda get bus from 3 in the morning before cock crow fi go downtown go buy yu necessary," she said.