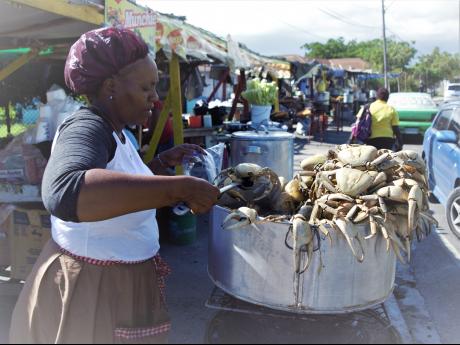 Travis South
Munchie, 40, her parents and older and younger relatives have been selling mouthwatering peppered crab at Heroes Circle in Kingston for over thirty years. 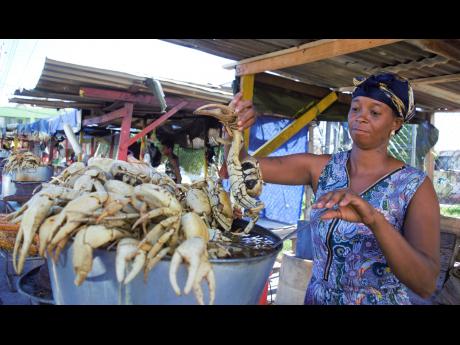 I grew up in Westmoreland and as I recall in the 70s, crabs would swarm the parish during heavy rains. As a little boy, the first thing you had to learn before going crabbing was how to hold the crab by the back without being bitten.

And, if you were bitten, you didn't break off the claw but you'd massage the eyes and hope the crab would let go. Crabbing was a night activity with a kerosene torch before the business of catching crabs turned digital with fancy lights. Back then, you would learn to quickly spot crab holes, grab the creatures and throw them in a crocus bag. Later they'd be placed in a drum pan and cooked in a big pot loaded with seasonings the following day.

The premium crabs were always the ones with the big claws and the females bearing clusters of eggs. Males have an innocuous v-shaped underbelly and females often bling a round shaped belly, sometimes loaded with neon orange egg clusters.

In the 80s there were literally thousands of crabs on Norman Manley Highway in Negril traversing the speedway after dark. One could hardly drive on that route without the constant crispy crunch of car tires running over crab backs.

Families weren't the only ones savouring the Negril crabs. So too were those monster yellow snakes from across the morass. Crocodiles and mongoose enjoyed them too. Quite a few horror stories were told back then about enthusiastic crabbers having to endure the malodorous stench of a crab that escaped a car trunk or under a piece of furniture in a living room. Or worse, a baby croc somehow finding its way into a crocus bag that was intended to be a catchment for crabs.

On my last trip to Jamaica, I was unable to find any cooked crabs in Westmoreland so I raced back to Heroes Circle near Little North Street where delicious cooked crabs are plentiful from 7 a.m. to 8 p.m.

Munchie who is 40 years old would not give up all the secret ingredients that have kept customers coming back for many years but she pointed out that Scotch bonnet, scallion and thyme are essential. Munchie, her parents and older and younger relatives have been selling crabs on the block for about thirty years.

"We don't actually do the crabbing ourselves nowadays, we buy land crabs that come in from nearly every parish including Portland, St. Mary and St. Catherine", Munchie pointed out. "Our prices range from J$300 for a single cooked crab and the technique of cooking it is passed down from generation to generation, enabling us to earn a living", she explained.

Crabs sold downtown daily in the Heroes Circle area with roast corn, roast yam and roast saltfish cooked up in a medley of season vegetables.