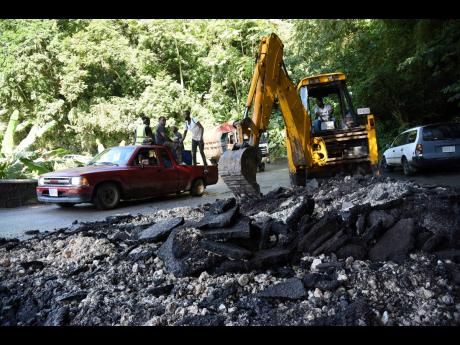 File
Photo taken January 22, 2021. Says Garth Rattray: “The fact is that, on paper, the Junction Road is a primary road, an essential thoroughfare that is part of our A4 road network. However, in reality, it is not treated as such.”

Several years ago, I frequently drove the Junction Road to get to Oracabessa. It had deteriorated from the earlier days when I used to go for weekend drives. The sharp and dangerous curves remained, rocks still jutted out from one side, and precipices still gaped on the other. The winding, narrow road could only accommodate one vehicle at a time around several corners, and large trucks commandeered entire stretches of road when they navigated the curves. It was always challenging, sometimes slippery and obstructed.

I always wondered why that essential roadway (from southern to northern Jamaica) was never properly rehabilitated. Alternative routes are extremely far away. Despite the passage of many decades, the addition of hundreds of thousands of motor vehicles, and the advent of modern earth-moving and road construction equipment, the anatomy of the roadway has remained essentially unchanged. However, the road surface has deteriorated immensely.

I still recall the night, years ago, that I came upon that fresh and massive breakaway near Broadgate in St Mary. I thanked God that I was driving a 4X4 pickup. A chunk of the roadway had disappeared down a ravine that led to the nearby Wag Water River. The opposite hillside was sliding towards the river. The road surface was replaced by deep sinks and high mounds of slippery soil. Many cars braved the crossing. They rode the hillside and the wet surface as they leaned and groaned their way from one side to the other. Although I was in my 4X4, I cautiously rolled along and exited the monster breakaway as I headed towards the north coast.

The promise to repair that breakaway and rehabilitate that portion of the road was used to trump up votes for an upcoming general election. Although I am no engineer, I realised that undertaking that job would be a huge venture. I wondered if there needed to be a bridge spanning that seemingly doomed stretch of road. Barring that, I felt that the substrate would require extensive planning and work for it to facilitate the percolation of water deep below the surface, and yet remain solid and compact enough to support heavy-duty machinery and all manner of motor vehicles.

I felt that there would need to be huge boulders deep below, followed by smaller and smaller aggregates, culminating in a very thick and properly compressed marl substrate to support a thicker-than-usual asphalt layer. I envisioned extensive retaining walls on both sides of that stretch of road. There was publicity surrounding the initiation of the work, and someone spoke of ‘benches’ (terracing) along the hillside to reduce the chance of landslides. Completion dates were thrown around and the work began.

I drove by a few times and noticed excavation equipment precariously perched way up on the slopes. I decided to stop driving that way to St Mary; I did not want to become a statistic. At one time, I heard that the roadway was to go up into the hills. Other sections of the roadway were worked on, and the part leading into the north coast seemed to go according to plan; but the section near Broadgate remained a very major problem. Years of detouring and single-lane traffic later, I heard that the roadway was completed. But it did not take long before catastrophe struck and a part of the (newly constructed) roadway collapsed. I was not surprised.

What shocked me was The Gleaner headlines, ‘Billions more for Junction fix – Broadgate repairs projected to end March, but Band-Aid plastered on Tom’s River’ (Monday, January 25, 2021). Pictures in the media of the collapsed roadway were devastating. All that money gone, and billions more of hard-earned tax dollars needed! The authorities remain conspicuously silent.

With the price of using the luxury North-South ‘High-cost-way’ achieving higher heights, I decided that it was time to see for myself the state of the Junction Road. I prepared for the drive by using the sturdy and trusty 4X4 pickup, but I was not mentally prepared for the journey. The roadway from above Constant Spring to Broadgate is rough and pitted with innumerable potholes, several large, denuded patches projecting portions of old landslides, many craters, fissures, and loose gravel in the road. The incessant jarring, jerking, rolling, and bobbing were very hard on the vehicle and on us.

That bad portion remains raw and narrow, with the ominous hillside still looming above. The roadway north of Broadgate was completed, but it undulates in places; I am concerned that the substrate may be sinking in areas.

NOT TREATED AS SUCH

We are in the 21st century. Some of the exorbitant taxes that we pay on fuel are for road repair/maintenance. Alternate routes are very far away. The luxury North-South ‘High-cost-way’ is prohibitively expensive. The fact is that, on paper, the Junction Road is a primary road, an essential thoroughfare that is part of our A4 road network. However, in reality, it is not treated as such.

As a citizen of Jamaica, I would be ashamed to transport any visitor using the Junction Road. Not only did I feel endangered, I also felt abused, disrespected and insulted by the authorities. Jamaica is so politically polarised that many citizens suffer in silence. Governments capitalise on that perennial weakness and get away with wasteful, substandard service. We deserve much better.

Garth A. Rattray is a medical doctor with a family practice. Send feedback to columns@gleanerjm.com and garthrattray@gmail.com.