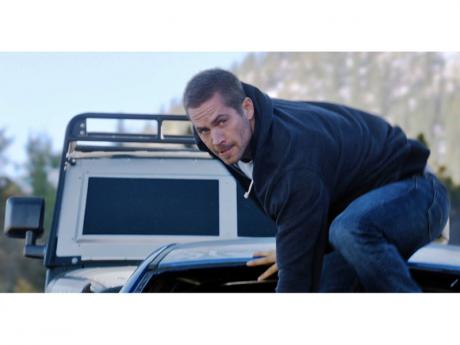 Contributed
Paul Walker in a scene from Furious 7

After Paul Walker’s death in 2013, the seventh instalment of the Fast and Furious franchise, Furious 7 which was set for release the following year took an unexpected turn.

Screenwriters and directors were now forced to find a way to do away with Walker’s character, Brian O’Connor, a lead who has been around since the franchise’s first instalment.

When the production company, Universal Pictures, announced that it would be released on April 3, 2015, many wondered whether they would kill O’Connor or simply retire the character.

Fans of Walker and the franchise flooded social media with posts of anticipation and excitement leading up to the movie’s release.

I went to see the movie a week after its release in Jamaica, hoping that the theatre would not be too crowded and that all the excitement would’ve dwindled.

All the slots were sold out. Luckily for me, two persons happened to turn in their tickets and I was able to see the movie that night.
Simply put, Furious 7 is the perfect eulogy for the late actor.

The Fast franchise is known for high action scenes, fast and risky driving and its overarching theme - family.

If there is ever a genre of film called 'Action Comedy Drama' Furious 7 is definitely in it.

There were times when persons in the theatre were on the edge of their seats because of the epic action scenes, whether it was because there was sky diving from a plane or a high speed chase on the edge of a cliff.

There was also that time when reality really hit home - Paul Walker is dead.

The story was re-written after his death in a way that made all his appearances solemn and realistic. He spoke mainly of wanting to be a good father and husband and leaving the street life behind. The repeated 'I love yous' cemented the fact that this was his last film.

At this point the only thing I could hear in the theatre was sniffing.  After I managed to wipe my eyes (which were sweating for some reason), I looked around only to see that persons in the theatre were crying.

I have to give it to the director, James Wan. He managed to make people love the film though half the scenes were ridiculous! Jason Statham was the villain and we saw when the ground of the city broke open and swallowed him yet he survived. Should I even comment on the fact that although the city was destroyed, only the two persons in the scene were affected?

In Furious 7 Tej and Roman (Ludacris and Tyrese) are closer than ever. This was somewhat puzzling at first knowing that it was really Brian (Walker) who introduced them. He and Roman grew up together and had been very close since the second instalment. However, bringing Tej and Roman together makes sense since Brian would no longer be around and Roman will definitely need someone who can tolerate him.

Furious 7 has a number of action stars but unlike The Expendables, we did not see them jumping into a scene for three minutes then disappearing for good. With people like The Rock, Jason Statham, Tony Jaa, Vin Diesel, Kurt Russell, Paul Walker and Michelle Rodriquez the action was properly dispensed.

The last five minutes of the film were dedicated solely to Paul Walker.

We see where the Fast family sat on the beach, watching his character bond with his girlfriend and his son and saying, "that’s where he belongs…home, where he’s always belonged."

The questions were finally answered - Brian was not killed but has given up on adrenaline, bullets and near death experiences all for the sake of his family.

I really appreciate a movie that can take me on an emotional roller coaster ride – one that can make me laugh and cry at the same time.

The movie has been sitting in the number one spot at the box offices since its release.