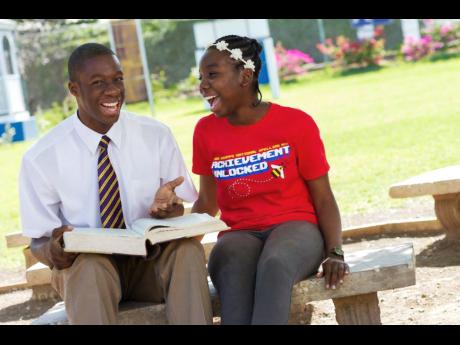 Contributed
Something has put teenage Spelling Bee coach Hanif Brown (left) and national champion Chaunte Blackwood in a jocund mood, as they peruse difficult words ahead of this week's Scripps Howard/ ESPN Championship.

This week, Chaunte Blackwood, 12, from Ardenne High School, will join 284 other spellers from across the United States, The Bahamas, Canada, Ghana, Japan and South Korea, who are competing in the 89th Annual Scripps National Spelling Bee Championship. This greatly anticipated event takes place in National Harbor, Maryland, from May 24 to 26. Chaunte is Jamaica's national spelling bee champion and her local sponsor is The Gleaner Company (Media) Ltd.

This year, the entertainment component for those watching the competition will be greatly enhanced with the addition of exciting, first-time interactive features. ESPN, ESPN2 and ESPN3, will combine to broadcast over 13 live hours of competition and features starting on May 25 at 8 a.m.

Throughout the competition, ESPN3 on WatchESPN will feature a second-screen, multiple-choice Play-Along version, presented by Sony's The Angry Birds movie that gives fans a one-in-four chance to pick the correct spelling of the given word, allowing fans to try their hand at competing along with the spellers.

This year's Play-Along version has been enhanced, adding a fourth multiple-choice answer to create a more integrated and immersive experience. It will still feature informational boxes highlighting the word's etymology, definition, pronunciation and part of speech, as well as live tweets, the speller's biography, and a lot more.

Also new this year is the SpellCheck feature on the main feed, highlighting each individual letter as the contestant spells the word. Correct letters will glisten in gold, and the first letter the speller gets incorrectly will be highlighted in red.

"Chaunte has been working very hard and I have every confidence in her abilities, as I do with all my spellers, and I am sure she will do herself proud," coach Hanif Brown told The Gleaner.