Oliver blows up NY area with ‘a bellyful of laugh’ 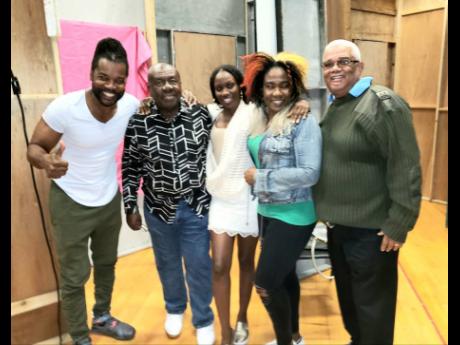 The two-hour production was a continuous bellyful of raucous Jamaican laughter and the play made sold-out stops in Brooklyn, NY; Hyattsville, MD; Queens, NY; East Orange, NJ; with early and late shows on Sunday in the Bronx, NY.

56 East Avenue is an actual address in Greenwich Town in Kingston. The location is a glorious tenement yard occupied by a number of eccentric and hilarious characters, and the play is a devastatingly funny study of the lives and the relationships among Oliver, the landlord, and his many tenants. The action is set in the 1970s and Oliver is supported by a very strong and magical cast – Volier ‘Maffi’ Johnson, dancehall queen Audrey Reid, Dennis Titus (who also wrote the script with Oliver Samuels) and Lakeisha Ellison.

Impeccable acting brought the brilliant script to life, and a vibrant set design, nostalgic ‘70s costume styling and the clever use of interludes of 1970s music with the audience singing along all helped to drive the howling, screaming audiences into a trance.

“This play is a powerful portrayal of a Jamaican tenement yard at its scandalous best and audiences are in for a special treat,” Oliver told The Gleaner just before the East Orange performance on Saturday night. The Jamaican theatre icon, who wowed national television audiences with his Oliver At Large series in the early 1990s, is also celebrating his 70th birthday this year.

“This is the best Jamaican entertainment attraction I’ve seen in a long time,” show promoter and television host André Porter affirmed after seeing the play. Porter had travelled from Philadelphia, Pennylvania, to northern New Jersey to see 56 East Avenue.

The rib-tickling 56 East Avenue continues its overseas diaspora run next week in the UK with performances in Manchester, Birmingham, Bradford Corn, Hackney and Catford.