Vintage Voices | Tune in to Gregory 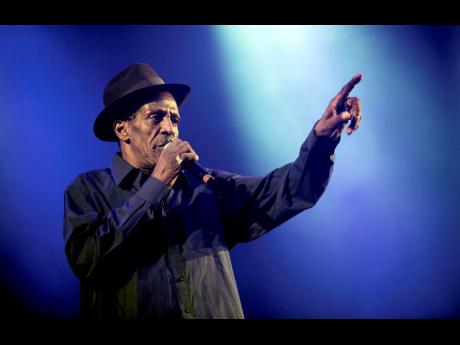 Last Monday, July 15, marked the 69th anniversary of the birth of the late, legendary, Jamaican singer Gregory Isaacs. Dubbed ‘The Cool Ruler”, nine years after his passing, he is living up to his moniker as his hits still rule, causing Isaacs to remain relevant, fresh, and an instant draw at dances and parties across the island.

His appeal to the opposite sex was an ever-present theme in his recordings, and in both his songs and his personal life, Gregory appears to wear his heart on his sleeve. His romantic vulnerability is almost palpably felt when he goes through his rounds. A few lines from his recording My Number One seems to convey the whispered plea of a man who has had many travails of the heart as he sings:

“ If you want to be my number one,

Let me know your future plan,

It was a theme that ran through most of his recordings. The Alvin Ranglin-produced Love Is Overdue on Ranglin’s GG record label is a perfect example of a lonely lover who is tormented by laments and loneliness:

“ Who is gonna tell me goodnight,

Now that she’s gone out of my sight.

Who is gonna tell me lies and let me think they’re true,

Now that my love is overdue.”

The real beauty about Gregory’s heart-felt recordings is that they were all written by him and were based on real-life situations. His widow, June, agrees, and she must know. She added that her late husband was somewhat of a genius when it came to songwriting, which he did in rhythmic, rhymed verses. “Gregory has never written a song on paper,” she explained to this writer in a 2010 interview. “He stores them in his head, line by line, sometimes with the help of a recorder, and records them straight from memory,” she said.

His mother, Enid Murray, noticed this phenomenal gift from early: “I was about to introduce him to a basic school teacher for enrolment when he was only two years and nine months, but before I could do so, he had already introduced himself,” she disclosed during that same interview, conducted shortly after his passing on October 25, 2010. She went on to confirm that he was born in the Fletcher’s Land community of Kingston on July 15, 1950, and, like me, attended the All Saints Primary School in the community. He later attended a private school along North Street in Kingston before entering the world of music.

He started his career by entering a few talent competitions and doing stage shows. Then in the late 1960s, he got his first break in the recording studios to do his self-penned Another Heartache for West Indies Recording limited (WIRL). It was, however, his second recording, My Only Lover, a self-penned one as well, for Rupie Edwards’ Success label in the early 1970s that set him on the road to success.

Many rate it as the first lover’s rock record, and, indeed, the template from which subsequent lover’s rock recordings were built. Gregory followed up with other gems such as All I Have Is Love, Let’s Dance, Salary Is Thin, Front Door, Tune In, Love Feeling, Mr. Brown, Meet Me At The Border, Soon Forward, and Night Nurse, which solicited a desperate appeal for help:

“ Tell her try her best to make it quick,

Woman tend to the sick.

For there must be something she can do,

This heart is broken in two.”

Throughout the 1980s and 1990s, Gregory held his own amid the popular deejay and dancehall boom, and, in fact, took on the youth at their own game and won with classics like Rumours, Big All Around, All I Need Is You, Hard Drugs, and One Man Against The World.

One of the lasting legacies of Gregory is the Gregory Isaacs Foundation, which was established shortly after his death. It has funded several needy organisations, including schools and places of safety. The organisation is now in planning mode for his 70th birth anniversary celebrations, which will coincide with the Red Rose for Gregory show in February 2020. June Isaacs sees it as “a big thing that will have celebrations and shows in Ghana, Brazil, Canada, the UK, Jamaica, and other countries to be confirmed”.

In the most recent activity, members of the foundation, family, friends, and well-wishers gathered at his graveside on his Earth Day, last Monday, to lay a new headstone, commemorating the honour of Order of Distinction (OD) bestowed on him by the Jamaican government in 2016. According to June, “It was a moving, one-hour ceremony that also saw performances by Bongo Herman and members of The Ethiopian Orthodox Church, along with tributes by Trevor ‘Leggo’ Douglas, Junie Star, Flaba Holt, and Junior Sinclair.” She says the old headstone, along with other memorabilia, will be placed in a museum, which she intends to establish at the family home.