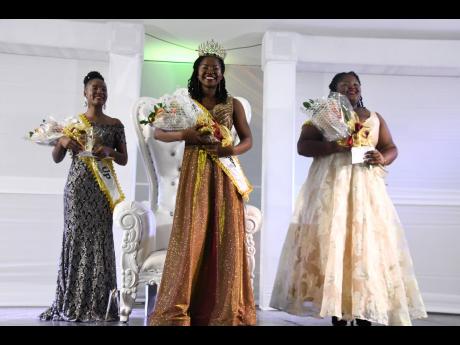 SHAVAE SCALE, a civil engineer, social media manager, and graphic designer from the Rose Heights community in St James, has been crowned as the 2022 St James Festival Queen, edging out nine other competitors to claim the title during the competition’s annual staging on Sunday evening.

Scale, 24, earned the right to wear the crown during her participation in the contest at the Montego Bay Cultural Centre. The competition was held under this year’s theme, ‘Reigniting the power of Jamaican woman’.

“I was always supporting the other girls, and they were telling me, ‘Shavae, you are possibly the queen.’ I am still in disbelief, and I am grateful for it,” Scale said of her win following the coronation ceremony, during which she was flanked by first runner-up Nafheeti Whittingham and second runner-up Claudine Mitchell.

“I actually joined last year, and due to school I had to slip out. But I really love my country and I really love serving, and I believe this is one of the greatest platforms for a young woman to be part of,” Scale added. “I just wanted the experience, honestly, but I am glad I was able to get more than just experience.”

A recent graduate from the University of Technology, Scale acknowledged that part of her motivation for entering the competition was her experience with discrimination while studying to become a civil engineer, a traditionally male-dominated field.

“I was discriminated against because I studied engineering, and I was told, ‘Either you choose to be a woman in the true sense of the word, or you just do nothing at all.’ I had a split personality, trying to be who I wanted to be, as well as trying to please society. But eventually, I chose not to do any of that, as I wanted to do what I wanted to do,” Scale explained.

Meanwhile, in her farewell address as the 2021 St James Festival Queen, Morganne Kellier congratulated her successor for joining the ranks of Jamaica’s trendsetting women.

“To the new queen, the time is yours. Congratulations, and welcome to the sisterhood of amazing women. Take this as your time to shine and give to the St James people and the wider Jamaican society, and remember that I will always be here to cheer you on,” said Kellier.

The new St James Festival Queen is set to follow in the footsteps of seven particularly noteworthy women who were recognised during Sunday evening’s competition, for their past and current contributions to development in St James.

The seven honoured women include:

* Violet Nielson, the first female speaker in the House of Representatives and the first member of parliament for St James East Central;

* Ancylin Morgan, past president of the Nurses Association of Jamaica and former matron of the Cornwall Regional Hospital;

* Janet Silvera, the first female president of the Montego Bay Chamber of Commerce and Industry; and