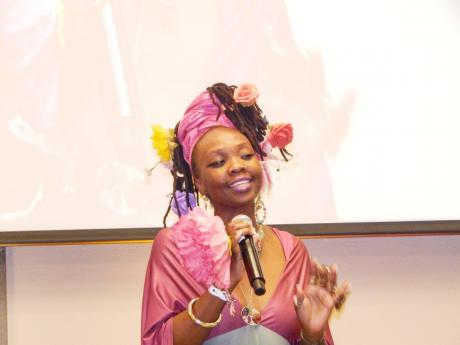 Michael Reckord
Ebony Payne recites one of her poems about racial pride. 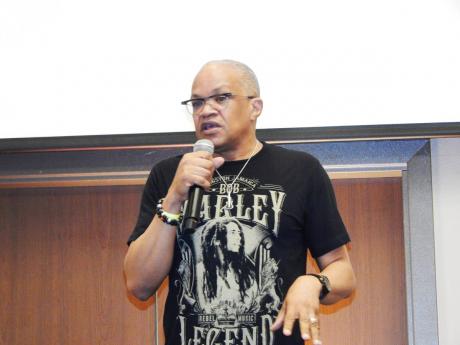 Michael Reckord
Dr Michael Abrahams’ poetry was, as usual, both amusing and caustic. 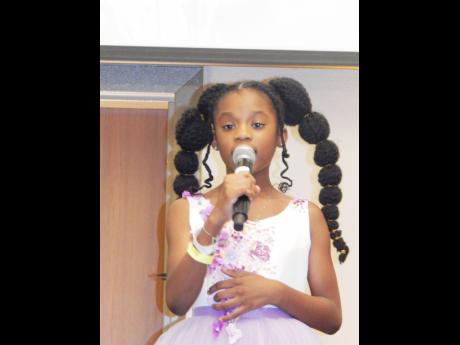 The 12th production of the Jamaica Poetry Festival (JPF) staged by poet Yasus Afari and SenYAcum Edutainment was held at the AC Marriott Hotel, Lady Musgrave Road, on Sunday evening.

It was a splendid affair, but that doesn’t mean it was without some shortcomings.

Presented in association with the hotel and PBC Jamaica, the concert comprised poetry, music, song, dance, comedy and lots of dramatic moments. A number of awards were also given out in the elegant ballroom.

There was variety, too, in the experience of the performers. Some were live and colourful in the space which held a large, enthusiastic audience, while others entertained from outside the island virtually, and were seen on a huge screen.

In addition to executive producer Yasus Afari, the personalities in the field of entertainment who would have been well known to Jamaican audiences included Mervyn Morris, a poet and emeritus professor of The University of the West Indies; pianist Monty Alexander (who offered a big surprise near the end of the show); composer and pianist Marjorie Whylie; and Dr Michael Abrahams.

Other big names were Skip Marley, a Grammy nominated grandson of Bob Marley and George Elliott Clarke, who we heard was a former poet laureate of both Toronto and Canada. Whylie, Marley and Alexander were JPF awardees for various achievements.

The first poet on stage in the three-hour-long show – which was amiably hosted by a vivacious, beautifully attired Simone Absolom-Gayle – was Sammoya Banton. Her three poems suggested that she is a protest poet. She complained that society is largely silent about domestic violence and about people limiting females by using the adjective “black” in a negative way when describing them.

Next up was Kai Falconer, who, very energetically, announced that she refused to be put in a box by other people’s beliefs, and later pleaded for safety and trustworthiness from those she had to deal with. Both poets got loud applause, as, clearly, many other women in the audience shared their feelings.

A couple of virtual guests then appeared in the persons of Clarke, the Canadian poet, and Patrick Lafayette, a founding employee of KLAS radio. Clarke’s long poem, Gospel of X (X being Jesus, he said), came through the speakers very muffled, but a few audible segments indicated that the poem commented on Jesus’ life and death. Lafayette, who was equally muffled, spoke about the importance of helping children with disabilities.

It was a relief to the audience to then have a live poet, Morris, who could be heard clearly. The past Jamaican poet laureate received enthusiastic applause even before he began delivering his dozen or so poems. Some, like Peelin Orange, The Pond, Valley Prince: for Don Drummond, The Day My Father Died and For Consciousness, came from his published books. Other were new. All were typical of Morris – brief, witty, insightful and with a twist in the tale.

Commenting on the presentation, the hostess declared that the poet’s work “encourage us to write”. The generally fine poetry of the other poets probably did the same. As Abrahams was later to declare in his poem We Need Some Heroes, great people inspire us.

Before the doctor performed, though, Whylie delighted the audience with three jazzy piano pieces, Evening Time, Fi Mi Love Have Lion Heart and an original tune that she didn‘t name. All bouncy numbers, they lifted the spirits and also lifted some people to their feet for a standing ovation.

During a break in the scheduled performances, the hostess introduced nine-year-old Canadian singer, writer and film and television actress Jazmin Headley, who was in the island to visit relatives and get to know the birthplace of her parents. She sang, beautifully, Jimmy Cliff’s I Can See Clearly Now.

Abrahams was on fire, as usual. With evident sincerity, he protested against corruption in the society (especially political corruption) and against violence, especially the domestic kind. His poem Dis Can Work was based on a true story about a woman he advised to leave her partner, but who ignored his advice. She was later murdered in a gruesome way. Abrahams’ ability to have the audience laughing at one moment and close to tears the next never ceases to amaze.

After a deaf woman performed Louise Bennett’s Nuh Likkle Twang, in sign language (with a translator in the audience), Monty Alexander appeared on the screen to speak about his musical journey from east Kingston to the wider world. He surprised many in the audience with a video of himself singing As Time Goes By.

His singing voice turned out to be quite pleasing. He has produced some 75 albums to date, he said, and another one, Love Notes, is slated to be out later in the year.

It was then time for Yasus Afari, himself, to take the stage. His poems, about the importance of caring for the planet and in praise of Mama Africa, women generally and Miss Lou, in particular, were delivered with style. He had music and dancers accompanying him and he strode commandingly around the stage.

Ebony Payne, a first time visitor to Jamaica, recited poetry about the power of art, about the disgrace of so many black men being incarcerated in American prisons, and about how proud she felt as a woman. She called herself “chocolate covered sunshine”. Lively tunes from reggae violinist Mark Stephenson closed the concert on a high note.