The Classics| Swearing-in of the first native Governor-General 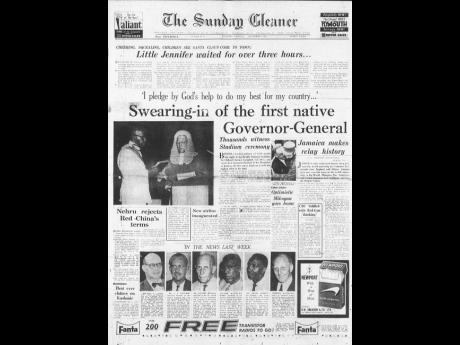 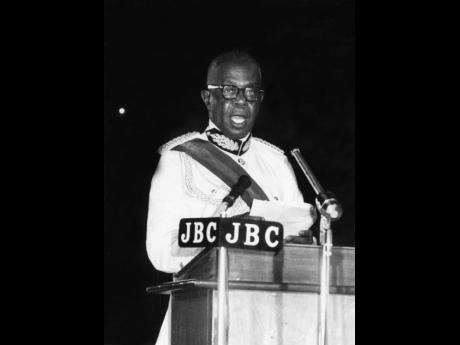 Sir Clifford Clarence Campbell, first native Governor-General of Jamaica, gives a speech on the occasion of his swearing-in ceremony at the National Stadium in Kingston.
1
2

BEFORE a hushed audience of 9,000 people last night in the floodlit National Stadium, Sir Clifford Clarence Campbell, G.C.M.G., was sworn in as Governor-General of the Dominion of Jamaica, the first native Jamaican to hold the highest office in the land.

Sir Clifford took the Oath of Allegiance and of Office standing on a red-carpeted platform erected before the centre of the main stand. He wore a white uniform, the blue and scarlet sash and the Star of the Order of St. Michael and St. George making a bright splash of colour across it. A white plumed helmet completed his official uniform.

Looking on were Lady Campbell and members of the Governor-General's immediate family, the Prime Minister, the Hon. Sir Alexander Bustamante and Lady Bustamante, and other high officials of Church and State, High Commissioners, Ambassadors and Custodes. Mayors and Consuls.

And making it a truly national occasion was the presence of the Leader of the Opposition, Mr Norman Manley and Mrs Manley and other Opposition members of Parliament.

Sir Clifford pledges to do right by Jamaica

In a speech at the end of the brief and simple swearing-in ceremony, the Governor-General pledged by God's help to do his best for his country.

"I say my country”, he added, “because Jamaica is home for me; by contrast, all my predecessors were sent here to administer the affairs of Jamaica, and this they did and left for home in England or on transfer to another colony on promotion or otherwise."

He said it was his duty to hold the scales evenly between all sections of the community and that would always be his resolve.

Sir Clifford appealed to all churches in Jamaica to dedicate Sunday, December 16 as a day of prayer for the Government of Jamaica and the Governor-General.

The new Governor-General ended his speech with "a very Airlines special tribute” to his wife and four children without whose love, understanding and help, the public service he had so far rendered Jamaica would have been impossible.

The ceremony, transferred almost at the last minute from King’s House in order to permit more than 10,000 original invitees to share in the historic occasion, took place in cool and clement weather.

The massed bands consisting of the bands of the Jamaica Regiment, the Jamaica Constabulary and the Jamaica Military, played for the gathering to launch the proceedings.

While the Guard of Honour mounted by the First Battalion of the Jamaican Regiment, under Capt. Barnes was taking up its position on the field, Mrs and Mrs Manley entered the stand. The audience, some of them standing, cheered and Mr Manley smilingly acknowledged.

There was another loud burst of cheering when the Prime Minister’s car entered the stadium and drove around the track to the dais.

Sir Alexander, in evening suit and black topper, mounted the dais for a general salute from the Guard of Honour, the massed bands playing the National Anthem.

There was another loud burst of cheering as the Governor-General’s Car came through the tunnel and on to the track. Sir Clifford, attended by his Aide-de-Camp, Major Rudolph Green, took the Royal Salute, and, attended by Brigadier Paul Crooks, Chief of Staff, and Lieut-Colonel David Smith, inspected the Guard of Honour.

Sir Clifford then returned to the dais for the formal swearing-in ceremony.

First, the Anglican Bishop of Jamaica, the Rt. Rev. Percival Gibson, led the audience in prayer and this was followed by the singing of the hymn, “Oh God our help in ages past”.

Then, the bewigged black-robed Registrar of the Supreme Court, Mr Alan Louisy, read the Commission of Appointment.

This was followed by the big moment. At 8:50 p.m., Sir Clifford moved forward, and in a firm, clear voice that rang through the Stadium, he subscribed to the Oath of Allegiance and the Oath of Office, administered by the red-robed acting Chief Justice, the Hon. A. R. Cools-Lartigue. At the same time, the Governor-General’s flag was run up the flagpole.

Sir Clifford kissed the Bible, signed the Oath of Office and assumed the title of Governor.

For the departure from the Stadium Lady Campbell came down from the stadium and joined her husband in the Governor-General’s car and drove off to King’s House.

Members of the audience cheered as the car moved off around the track and the Governor-General responded with a salute.