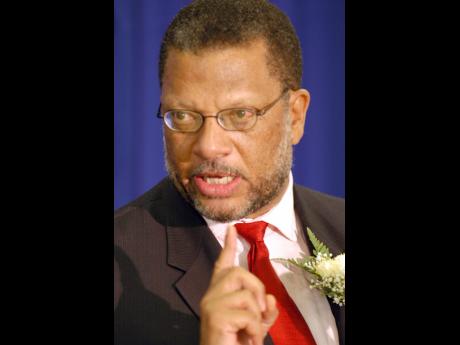 The National Security Minister, Dr Peter Phillips got the support of the private sector regarding his crime plan. The stakeholders shared that though the plan seemed solid, the implementation and timeframe would be very important in its success.

PRIVATE SECTOR leaders yesterday threw their support behind the 12-point crime plan of Dr Peter Phillips, the national security minister, hailing it as far-reaching and urging civil society to work with the security forces to quell the violence rocking the country.

While optimistic that the measures would work, they cautioned that timely implementation would be critical to the psyche of a Jamaican public now highly intolerant of crime and violence, particularly the high levels of homicides.

Dr Phillips, who was given the national security portfolio on October 22, presented his crime plan in a televised broadcast on Wednesday night.

I"t’s one of the better approaches (to crime-fighting) that we have heard," said Dr Carolyn Gomes, head of Jamaicans for Justice, the human rights lobby group. She cautioned, however, that implementation was absolutely the key. "It’s one thing to say it. It’s another thing to actually see it happening. We will be watching,", she warned.

She said the plan seemed comprehensive, but she was disappointed over the lack of emphasis on the community and on the involvement of the ordinary citizen in the crime-fighting process.

Anthony Chang, president of the Jamaica Chamber of Commerce, described the presentation as very strong. He expressed satisfaction that some of the recommendations put forward by the chamber were reflected in the minister’s presentation.

Mr Chang noted that the presentation focused much more on crime-fighting than on crime prevention. To this end, he would have wanted the minister to speak to the contributory factors such as the breakdown of family life and high levels of unemployment. He lauded the move to go after money launderers in a more forceful manner. The CoC head observed the need for improvement in the operational efficiency of the security forces and urged the security forces chiefs to take a closer look at that area.

Beverly Lopez, president of the Jamaica Exporters Association (JEA), was very impressed with the sense of purpose that the minister showed in his presentation. She added that a resolute set of proposals that must be given time to work was presented.

"From an exporters position, we are very keen on the whole border control initiative," she told The Gleaner. She argued that it was crucial that all entrance and exit ways were monitored and lauded the move to acquire X-ray equipment and boats for the Jamaica Defence Force (JDF) Coast Guard. But she warned against any protracted delay in implementing the new measures.

"... Because we have heard before about X-ray equipment, so we really need to know what is the timeline", the JEA head remarked. Mrs Lopez praised the move to modernise the police force and to employ two civilians at the rank of deputy commissioner of police. Like Mr Chang, she said there was need to improve the operational efficiency of the force, especially in intelligence gathering. Pointing to the controversial Crime Management Unit, Mrs Lopez said, "I welcome the fact that he (Dr Phillips) never announced another squad."

The Shipping Association of Jamaica, through Grantley Stephenson, its president, welcomed the measures to stem the tide of drugs and guns through the island’s ports and the overall plan to tighten control over the country’s borders.

The new plan will enhance the capability of the Marine Police and Coast Guard, and this is a welcome development, a statement from the association said. It cautioned that for the plan to work, it would take the total cooperation of all players in the port community, especially all workers.

The Jamaica Manufacturers’ Association, through Clarence Clarke, its president, has thrown its support behind the new crime plan. Mr Clarke is especially pleased with the measures aimed at clamping down on the activities of drug and gun dealers.

He said he would have wanted an indication of the cost to purchase equipment and the timeframe within which the new measures would be implemented.