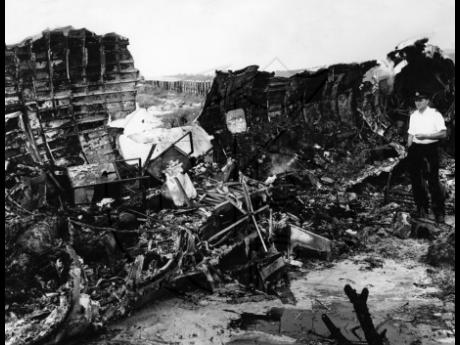 Charred bodies in the burnt-out hulk of the Avianca Super-Constellation, all that was left of the giant plane after the Montego Bay crash on January 21, 1960.

Dozens were killed in a horrific crash on the runway in Montego Bay. The plane reportedly had engine issues and had to be diverted before landing in Jamaica. Four passengers who were on board decided not to get back on the flight after realising the severity of the engine troubles it had.

37 killed in airliner crash at Mobay

THIRTY-SEVEN persons, one of them a child, died in flaming horror at the Montego Bay Airport in the early hours of yesterday morning as a big Avianca Airlines HK177 Super Constellation crashed and exploded on the runway at 2.35 o’clock.

Nine persons - four passengers and the crew members – survived the most disastrous air accident in civil aviation history in Jamaica.

The big four-engined aircraft, 10 hours overdue, came in for a landing at Montego Bay through rain conditions described as “not abnormal” hit the runway, bumped, exploded, burst into flames, and went skidding crazily towards the swamp at the southern end of the runway, shedding engines, wings, and passengers.

When it came to rest finally in the swamp, the big aircraft was a funeral pyre, most of its passengers still strapped in their seats, dead or dying, its heavy flames lighting up the surrounding area through the murkiness of the early morning rain.

This was the fourth fatal crash of a commercial airliner since the leap year began, and it raised the death toll in air crashes in commercial flights to 163 in the first three weeks of 1960.

Of the 37 persons killed at Montego Bay, three were Jamaicans so far as is known up to the present, one a Caymanian, and the others were passengers booked on vacation or business pursuits in Jamaica and South America.

Those who survived included the plane’s captain, Mr J. Duque, who with his co-pilot escaped through the emergency exit provided for operational crew, three other crew members, and four passengers. The fortunate passengers are Mr and Mrs Ian W. Kelton of Australia and Mr R.A. Loven and Mr H. Wytzes, both of The Hague, Netherlands. None of the survivors was seriously injured.

Four other passengers (one of them Mr Richard Osler, general manager of the Caribbean Cement Company) left the plane at Miami and refused to continue the journey on the ill-fated aircraft after engine troubles had developed on its flight from New York to Montego Bay and forced the pilot to divert the flight to Miami.

The cause of the accident will be the subject of a public enquiry to be undertaken by the Government of Jamaica, but from the statements of some survivors and eyewitnesses, the flight – Avianca Flight 671 – was headed for disaster 50 minutes from its take-off at Idlewild Airport, New York, at 10 a.m. on Wednesday morning.

At that time, one of the engines reported to be the No. 3 engine developed trouble and had to be “featured”,  the pilot deciding to make for Miami instead of flying on to Montego Bay.

Mechanics at Miami worked to make it airworthy again while the passengers waited and new passengers booked flights.

But on the run-up at 8 p.m., there was engine trouble again. This time, the trouble, so it is reported, was distributor trouble in the No. 2 engine. The plane taxied back to the airport building and passengers disembarked. Four of them, seeing that two engines had been in trouble, decided not to make the rest of the journey on that aircraft. When the aircraft finally left Miami Airport at 11.45 p.m., the rest of passengers continued their journey to a flaming destiny on the runway and in the swamps of Montego Bay.

The flight from Miami to Jamaica was described as uneventful until coming down for the landing, the aircraft ran into clouds and rain conditions which, however, were described as not abnormal. As the big plane touched down, the left gear collapsed, the plane jumped into the air, and there was an explosion as two engines were ripped loose to land 100 yards away from the fuselage and in the swamp. A wing was also torn off by the blast, and the giant plane, like a wounded, ground bird skidded, blazing along the runway to end up in the swamp.

Five of the seven Colombian crew and four passengers, who were sitting in the rear compartment of the plane, made their escape through emergency doors and windows. The rest of the plane’s passengers and crew were burnt to death.

The $2 million Super Constellation burned for two hours while the airport fire brigade under Assistant Superintendent H.R. Crossdale and the Montego Bay Fire Station fought the flames. At the end of that time, they brought the flames under control, but it was some time before the smouldering wreckage could be entered.

When the police civil aviator and airline officials were there to probe the ruins, they made gruesome finds. Charred remains of human bodies testified to grim attempts by the passengers to escape.

All died swiftly, however, some still strapped in their seats with hands before their eyes in a futile effort to keep off the flames. Others were thrown clear of the aircraft and into the swamp waters.

Here and there in the mass of ash and tangled metal were seen a ring, a watch, a purse, a notebook, and money.

And the police went minutely through their grisly finds to establish identities.

The bodies were removed to the Montego Bay morgue for post-mortem examinations under the supervision of Dr Sangulnett, senior medical officer of the Montego Bay Hospital, Dr Herbert Morrison, MLC, and nurses.

Among those early on the scene this morning was Fr. Phillip Kiely, S.J., who administered last rites.

Officials early on the crash scene were Mr K. Paton Jones, director of civil aviation, and Mr Clinton Alexander, manager of the Palisadoes Airport. They were followed by the Hon. A.G.S. Coombs, minister of communications and works; Mr A.R. Abrahams, permanent secretary in the ministry; Mr O.H. Gold so, assistant under-secretary in the ministry; the Commissioner of Police Mr L.P.R. Browning; Mr Murlin Arner, head of Pan American Airways in Jamaica with which Avianca Airlines are associated.

The governor, accompanied by his ADC, Captain Owen Stephenson, and Mr Robert MacGregor, United States consul-general in Jamaica, came later and surveyed the scene and conferred for a short while with the airline officials concerned. Mr Coombs and the ministry officials also had talks with officials of the airline.

The Montego Bay Airport was closed to commercial traffic by the Civil Aviation Department until late in the afternoon when all bodies had been removed and Mr K. Paton-Jones, as inspector of accidents, began official investigations into the crash.

The airport was officially reopened at 6.10 last night, with the first commercial plane landing at 6:20 o’clock. It was a TCA Super Constellation flight from Toronto. The first plane to leave the airport after it was opened was Tropicair’s Apache, carrying the Gleaner pictures to Palisadoes Airport.