Government to acquire land for squatters 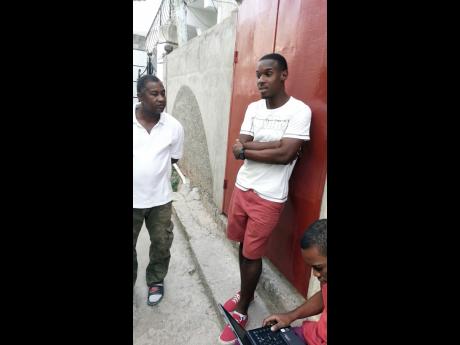 Barrington Flemming
Adrian Headley (right) looks forward to stability which owning a piece of Coffee Lane will have on the lives of residents. 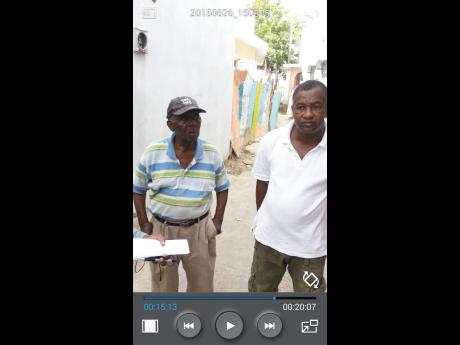 Barrington Flemming
Coffee Lane residents Ancel Smith (left)and Phillip Barker react to news that the Government is to purchase the two-acre property on their behalf.
1
2

The Government is moving to formalise the tenure of 22 families who have been informally occupying lands at Coffee Lane, Mount Salem in St James for more than 50 years.

Cabinet last month granted approval for the compulsory acquisition of the two-acre property under the Land Acquisition Act. The acquisition of the land will allow the Ministry of Transport, Works and Housing to begin proceedings to secure tenure for the residents.

This is welcome news for 88-year-old Ancell Smith, who has been living at Coffee Lane for the past 64 years. He said he was very happy that the Government would be purchasing the land on behalf of the occupants as, in more recent times, they have had legal battles with Beresford Heath, whom, he said, has laid claim to the property.

"Beresford Heath came and said he wanted to collect rent from us for the property, but I told him no and took him to the rent board. The matter eventually ended up in court and I had to trod the road to court for three years until the judge threw out the case saying he had no grounds on which to collect rent," Smith recalled.

As part of the housing ministry's thrust to address informal settlements, some $37 million has been set aside in this year's budget to facilitate the acquisition and regularisation of properties. Last year, the ministry successfully acquired property at 12 Whitehall Avenue in St Andrew to facilitate the splintering of titles for the upgrading scheme at 10-14 Whitehall Avenue, benefiting more than 100 occupants.

Additionally, through private treaty negotiations, the State provided security of tenure for approximately 500 residents in Effortville, Clarendon; Canterbury, St James; Cousins Cove, Hanover, and communities in St Andrew at a cost of $26 million.

The occupants of the Coffee Lane property cannot wait for the acquisition programme to come their way. Phillip Barker, who has lived in Coffee Lane for more than 40 years, believes that the Heaths will be unwavering and will be pushing relentlessly to collect for their property. He said a grandson visited the area recently, stating that the residents would be required to pay taxes and that he would be coming to meet with them to deal with that.

"He said he is coming here to talk about some taxes, but I hope that the Government moves fast and deal with this matter once and for all so that we don't have to face anybody about rent or taxes after so many years," Barker said.

Gavin Wood, 30, who grew up in the area, says formalising the tenure would be good for the residents as "the granting of titles would serve to empower them, so I think it is a good move".

"It would be a positive move as many times we go to the bank and we seek a loan and we are denied because we have no collateral, so this would certainly work in our favour," Wood added.

For Susan Nicholson, who has lived there for 30 years, it would be a proud moment to finally stake a claim to the land.

"I want to thank the prime minister for doing something to help us. It means we can actually officially own where we live," Nicholson explained.