Jamaican attorney slams US over treatment of most vulnerable 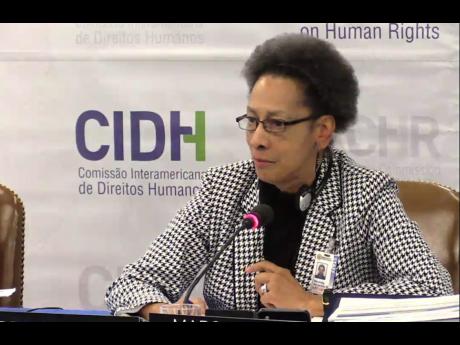 Less than four months after being elected one of the commissioners of the Inter-American Commission on Human Rights (IACHR), Jamaican attorney Margaret Macaulay has stamped her mark on the international body by blasting the United States government over the difficulties being faced by some minority groups in that country to access potable water.

Addressing a hearing hosted by IACHR, Macaulay noted that she is from one of the small-island, poor countries which the US has been generous in helping around the world, but expressed shock at the difficulties some Americans are facing in meeting some of their basic needs.

She said the US needs to balance its efforts and focus on addressing internal issues, too.

"If you're doing that (helping others) outside of your borders, can't you do it at the same time in tandem so that nobody falls through the cracks?" Macaulay questioned, eliciting applause from participants.

"I literally cannot understand the most powerful country in the world having these kinds of stories about the lack of clean, potable water and sanitation!

"It really blows my mind, quite frankly. There should not be these gaps. If you ignore your most vulnerable, I say it quite bluntly, you are not a civilised society," added Macaulay to more applause.

The April 4 hearing hosted by the IACHR, which is part of the Organisation of American States, was scheduled in response to a crisis caused by contaminated water supplies in the city of Flint in Michigan state.

It featured stark testimony that sharply contrasted with the bureaucratic statements of US officials who largely failed to address the specifics of the collective human rights violations, which were highlighted and which led activists to call for the hearing.

After all of the representatives spoke, the US officials opened with an overview of what the country has done and continues to generously do through initiatives intended to improve water and sanitation around the world.

However, this tactic backfired in extraordinary fashion as Macaulay responded.

Others at the hearing told horror stories, including one told by Chili Yazzie, a farmer from Navajo Nation, one of the largest tribal regions in the US.

Yazzie told the human rights body of the release of contaminated water that ended up into the San Juan River, which is critical to the group's agriculture.

The US Environmental Protection Agency had admitted last August that one of its safety teams 'accidentally' released contaminated water from an abandoned gold mine into the Animas River.

US government officials at the IACHR hearing spoke of financing difficulties in fixing some issues, but they committed to collaborating with the relevant agencies and indigenous groups to address the issues.

The IACHR is an autonomous body of the Organisation of American States which is responsible for promoting and protecting human rights in the American hemisphere.

Macaulay and the other commissioners will serve a four-year term which started on January and will run to December 31, 2019.