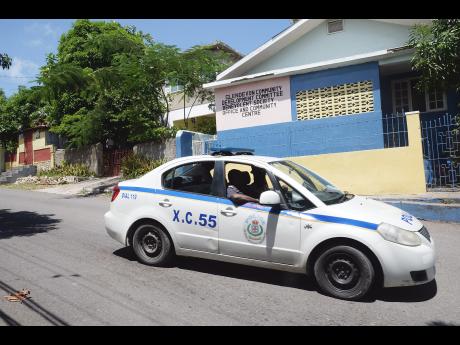 File
Police and soldiers have been busy patrolling sections of Montego Bay.

St James is now standing on the doorstep of dubious history as the parish registered its 212th murder over the past weekend, equalling last year's record-breaking tally.

This year is now on the verge of becoming the bloodiest year in the parish's history.

"It is a damn shame! With the way people are being slaughtered, we could well go past the 250 mark before the end of the year," a former top-flight St James crime fighter, who asked not to be identified, told The Gleaner yesterday.

"In our time, we used to have murders, but we never allowed criminals to be as dominant as they are today," continued the ex-policeman.

"We need police who know the terrain and are not afraid to confront criminals."

The latest victim of the spiralling murder toll is 31-year-old Orville Thelwell, who is of a Mt Horeb address, near the problem-plagued Cambridge community in rural St James.

According to reports from the Cambridge police, approximately 8:30 p.m. Friday, residents in Mt Horeb heard a barrage of gunfire and summoned the police. On the arrival of the police, Thelwell was found dead in his yard with multiple gunshot wounds to his upper body.

In recent months, the Cambridge community and surrounding districts such as Mt Horeb and Retrieve have been a hotbed of gun violence, which has resulted in several murders, include three members of one family - a grandfather, his son and his grandson, who were all killed in separate incidents.

"First time Mt Horeb was a peaceful ... we could sleep with our doors open because we never even used to have petty crime," an elderly grandmother told The Gleaner yesterday.

"Since the scamming (lottery scamming) come into the community, it mash up ... it's just shooting, shooting and killing."

Despite several policing initiatives to include changes in the parish's police command structure, increased personnel and joint police-military patrols, the gangsters, who are believed to be players in the illicit lottery scam, continue to wreak murderous havoc.

Last week, Gloria Henry, president of the Montego Bay Chamber of Commerce and Industry, admitted that the crime situation was now taking a toll on the business community, especially in the St James capital, the centre of the epidemic.

"We are beginning to see where we can lose some business because of crime in Montego Bay," said Henry, while addressing last week's launch of the Kiwanis Club of Providence Montego Bay's Breast Cancer Run/Walk 2016.