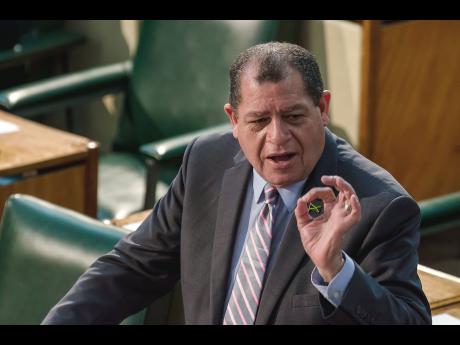 A debt-management branch and provisions for the Government to take up that which its public bodies owe are among a range of proposals in new legislation aimed at bringing Jamaica's debt management in line with international standards and practices.

Finance Minister Audley Shaw tabled the piece of legislation in the House of Representatives on Tuesday that is seeking to amend the Public Debt Management Act (PDMA) that was passed in 2012.

According to the Memorandum of Objects and Reasons of the Act to Amend Public Debt Management Act, the changes being proposed are to make the 2012 parent law "more detailed and more consistent" with international and local standards.

Shaw argued that the 2012 act did not make provisions for operational bodies with responsibility for various aspects of public-debt management.

As a result, there is the proposal to establish the debt-management branch to bring its four sections into operation. Those sections are the Portfolio Management Office, the Debt Strategy and Analysis Office, the Debt Operations Office, and the Compliance Office.

Among the branch's responsibilities will be "to develop, implement, monitor, and review" a three-year medium-term public debt management strategy. It will also have to advise the finance minister on the acceptability of the terms and conditions attached to all proposed loans and debt offered to the Government.

If Parliament approves the changes, the Government will be empowered to assume the debt of public bodies. That provision is not contained in original legislation passed in 2012.

A ministry paper on the proposed law said that although there's no provision, the Government is called upon to, "from time to time", cover non-guaranteed debts of public bodies.

In addition, there is also a new provision mandating the finance minister, within one month after the end of a financial year, to table in the House of Representatives a report on the management of the public debt for the financial year that just ended.

That proposed provision is in keeping with changes to the budget calendar, which, under the fiscal rules legislation, requires the tabling of the National Budget in February of each year to allow for passage before the April 1 start of each financial year.

The amendment bill is also seeking to give the finance minister the power to appoint the Bank of Jamaica to act as the fiscal agent for the Government in accordance with a signed fiscal agreement.

Drafting instructions for the amendment bill were issued last year November. In 2014, a World Bank review made recommendations for the institutional capacity building that would make the operations of the parent law more efficient.