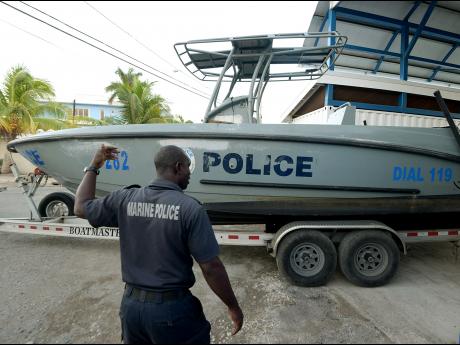 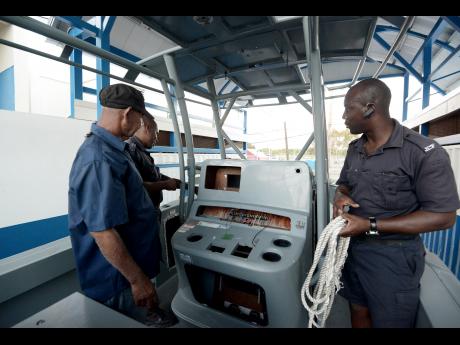 Gladstone Taylor
Members of the Marine Police assess the condition of the recovered stolen vessel upon arrival at Marine Police headquarters at Newport East, Kingston, yesterday.
1
2

Both local and Honduran police were yesterday searching for two high-powered engines and other gadgets after a service vessel stolen from the Marine Police Division in Westmoreland last February was found scrapped and abandoned on a beach near Honduras on the weekend.

The remnants of the Boston Whaler Boat, which was a gift from the United States government, were retrieved on Sunday from the Honduran military, according to the police.

Jamaica Constabulary Force officers who travelled to Rosalina Bank - located about halfway between the two countries - had to tow the disabled vessel back to the Negril coastline. Late yesterday evening, it was taxied to the Marine Police headquarters in Kingston for repairs.

Assistant Police Commissioner Assan Thompson, head of the Border Security Branch, yesterday said that no one was arrested in connection with the scrapped vessel, but theorised that it might have been used in criminal activities prior to being scrapped.

"We strongly believe that could be a possibility. We had seized a boat some days before ours was stolen and that boat, based on our investigation, possibly came up from Honduras, so it could be a tit-for-tat with our boat," said Thompson.

"We seized one of their boats and it could be that they wanted to get back (at us) and stole ours. It is a wake-up call for us to pay very keen attention to our borders and, moreso, to the uncontrolled ports," said Thompson.

Yesterday, officers looked on in awe at the defaced boat, which had empty shelves and orifices where navigational equipment once were. The boat seemed structurally sound, but its two engines were missing and it appeared the criminals attempted to customise it for their purposes, the police speculated.

"We still don't have the engines. That is a major problem. We have to find them," remarked a senior officer, examining the boat with resolve yesterday.

The area from which the boat was reportedly stolen in Negril was an alleged security concern for officers, who claimed that members of the Marine Unit had to seek assistance from fisherfolk in Negril to embark and disembark the vessel from its dock.

It was unclear whether any local officer was being investigated as part of the theft, but Thompson warned that policemen could be sanctioned.

"In-house investigations have taken place by the inspectorate of the constabulary and that is still ongoing. In addition, we have been sharing particulars between the two countries as part of the investigation," he said.

Meanwhile, Thompson lauded the efforts of some 11 members of the marine police who braved dangerous waters to retrieve the boat on the weekend.

The members set sail from Negril Point for the 340-mile journey early Sunday morning. They completed the round trip in less than 48 hours.

"The mission was an extremely risky and treacherous one. However, the necessary threat and risk assessments were done, along with practical exercises under bad weather conditions, before execution," said Thompson.