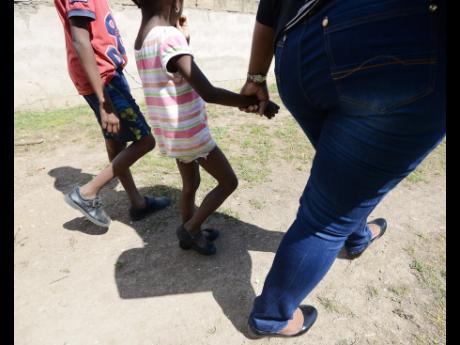 File
An employee of the Child Development Agency removing two children from their home in Meadowvale, Portmore, St Catherine, yesterday.

Representatives from the Child Development Agency (CDA) yesterday removed two children from their home in Portmore, St Catherine, and are seeking assistance for a mentally ill woman who was reportedly being abused by her mother and sister.

The two children - a four-year-old girl and her eight-year-old uncle - were taken as the police launched a probe into the incident. Their removal came as a relief to the concerned residents of Meadowvale Drive, near Gregory Park.

"We are taking the children. We are going to place them before the court. We are going to put them in a place of safety until we can find somewhere suitable for them to go," offered a CDA officer yesterday afternoon while his frowning female coworker ushered the two infants into a waiting car.

"The children and the daughter are being abused physically by the grandmother and the living environment is not good. There is no running water and we don't want to leave them in a situation like that and it continues," the government worker said.

"We are going to talk to the powers that be and see how best we can move the mother from here. We have a relationship with Father (Richard) Ho Lung, Food for the Poor, and so on," he continued, with onlookers praising his colleague as she made her way to the vehicle.

According to the residents, for at least two years, they have been plagued by the screams of 25-year-old Nashoya Bailey, who lives at the house with her daughter, her eight-year-old brother, a 21-year-old sister, and her mother who appears to be in her mid-forties.

"Big man, we can't take it. This has been going on for too long. We tired to hear them a cry over there. We call police all the while and nothing don't come out of it. But we can't mek she stay there and die," said John Martin, while fuming at Bailey's condition.

"My friend go St Maarten and come back good and look good same way two years ago. Little after that, we can't see har, and then when we see har, she start look so," said Lue Brown, one of Bailey's friends.

Yesterday, Bailey, who also suffers from epilepsy, exited the house shaking, her thin legs barely taking her over the threshold.

Alleged abuse victim skinny, covered with scars Nashoya Bailey was emaciated and had deep scars on her forehead, arms and back. The children reportedly attended school infrequently.

According to Bailey, her mother and sister have been constantly abusing her and her daughter. She claims that because she is sick and can hardly help herself, her mother often feeds her stale food and beats her whenever she does not want to eat.

"Look pon me! This is not me! Them beat me. Them don't feed me. Me don't bathe. Me nuh know why she a treat me so," screamed the woman, her cries getting louder as her daughter was being separated from her. Her mother and sister, however, denied the claim.

"I want to leave here. Unnuh help me nuh. Please help me," she cried helplessly as her mother looked on, fumbling at responses to questions from the policemen.

A police inspector on the scene did not arrest Bailey's mother or her other daughter for any of the allegations and declined to comment on the matter, explaining that he would have to get in touch with his superiors first.