Unacceptable! - Local engineers want to be paid to work on new parliamentary building 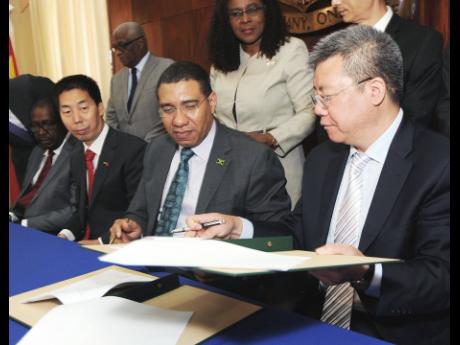 File
Andrew Holness (centre), prime minister of Jamaica, takes the communique from Xuexaun Zheng (right), vice-president of China State Construction Engineering Corporation (CSCEC), during the signing of a memorandum of understanding for the building of a new Parliament building. Looking on are (from left) Ransford Braham, chairman of the Urban Development Corporation(UDC); Niu Quinbao, ambassador of the Peoples Republic of China; (back row) Dr Glen Christian, director, UDC, and Audrey Sewell, permanent secretary. The signing ceremony was held at Jamaica House on March 9.

The Jamaica Institution of Engineers (JIE) has branded as "unacceptable" a proposal it says has come from the Urban Development Corporation (UDC) for local professionals to participate in the designing of a new parliamentary building on a "voluntary basis", when their Chinese counterparts would be "paid".

In March, the JIE's College of Fellows publicly accused the Andrew Holness administration of "bypassing the inputs and interests of Jamaicans" in the construction of the building, which, it said, was not just a meeting place, but "an expression of our Independence and a symbol of our democracy and national pride".

"What we heard, JIE was very disappointed," Barnaby told

The Gleaner. "They kept on saying they wanted Jamaican professionals' contribution to be voluntary. To volunteer, yet the Chinese will be paid, as far as we understand. To us, it sounds like a done deal, but they said that it is not a done deal."

"We were just being called there to be advised what's going to happen. If we're not careful, all we'll have to do is fall in line. What we hear so far is most disappointing and unacceptable."

Barnaby said that none of the suggestions, including for groups to partner with the UDC, has been rejected, but he said that the JIE and other local interest groups like the architects and surveyors would meet soon to decide on an official response.

The Urban Development Corporation (UDC) is yet to respond to queries from The Gleaner regarding the accusation from the Jamaica Institute of Engineers (JIE) that they were being asked to "volunteer" their services for the designing of the new parliamentary building while their Chinese counterparts would be "paid".

The UDC, on behalf of the Government, signed a non-binding memorandum of understanding on March 9 with China Construction Company of America. Government sources have suggested that the Chinese company will not be paid for providing a design proposal for the site.

The Government intends to develop a section of Heroes Circle in downtown Kingston into 'Government Circle', which will include the new Parliament building, replacing the current one on Duke Street.

Following the March concerns of the engineers, Prime Minister Andrew Holness, while not speaking specifically to the parliamentary building, said, "purposeful efforts will be made to include Jamaicans in the design and execution of the project" because "this was always the intention of the Government".

Under phase one of the project, the Chinese company will provide consultancy services for the design concept for the new Parliament building and the proposed 'government offices oval zone project.

The design is to accommodate the Parliament building on 50 acres of land, as well as the use of 240 acres to construct several buildings for government ministries, agencies, and departments.