Buggery is like any other sexual sin - Pastor Brevitt 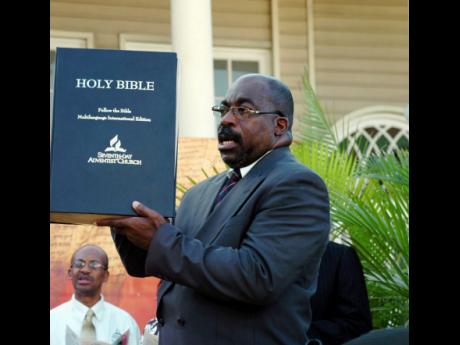 Christopher Thomas
In this file photo Pastor Charles Brevitt, president of the West Jamaica Conference of Seventh-day Adventists, holds up the Travelling Bible during the "Follow the Bible" campaign held in Sam Sharpe Square, Montego Bay in 2009.

Unlike some of his fellow clergymen, who are seemingly waffling on the issue, Charles Brevitt, the outspoken pastor of the Glendevon circuit of Seventh-day Adventist churches, in St James, says buggery is just as wrong as other sexual acts condemned by the Bible.

"It is the same New Testament word that describes fornication to mean loose sex between unmarried people, which is used to describe sexual contact between same-sex people. It includes bestiality, homosexuality, incest, and the whole gamut of sexual perversions," said Brevitt.

"Buggery, or homosexuality, is no worse than a man who has his wife and has his sweetheart next door to him," Brevitt added. "It is the same law that says you shall not commit adultery and fornication, which implicates buggery as being wrong."

A parliamentary committee is currently reviewing the Sexual Offences Act.

Recently, The Sunday Gleaner reported that Lord Bishop Howard Gregory, head of the Anglican Church in Jamaica and the Cayman Islands, urged the committee to abolish the buggery law instead of conducting a referendum on it.

"Sexual activity engaged in public spaces is illegal and should continue to be so, whether of a heterosexual or homosexual nature. Beyond that, what happens in privacy between consenting adults should be beyond the purview of the Government," the bishop stated.

Homosexuality appears to be one issue on which most Jamaicans have a very low tolerance level, which is believed to be one of the reasons why those pushing for the repealing of the buggery law are not seeking a referendum to decide the issue.

Gay-rights groups, locally and internationally, have been at odds with Jamaican dancehall deejays for a long time because of the acerbic anti-homosexual lyrics in many of their songs. Many have been blocked from performing at various venues in Europe and the United States.