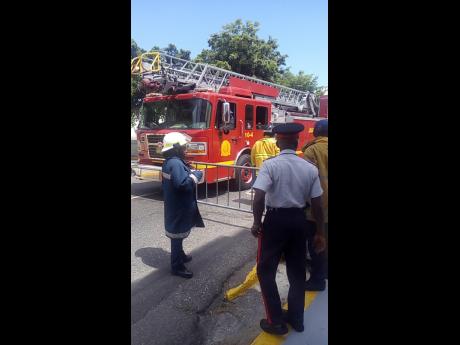 Edmond Campbell
A team from the Jamaica Fire Brigade attempting to make their way through a barrier erected on Duke Street during a sitting of the Senate yesterday.

While members of the Upper House deliberated on a bill to amend the pensions law, a tense standoff was unfolding between a team from the Jamaica Fire Brigade and the police almost on the doorsteps of Gordon House.

The Gleaner understands that members of the Fire Brigade approached a barrier on Duke Street near the intersection of Beeston and Duke streets without sirens on.

The fire team's attempt at getting the police to remove the barrier apparently failed and the siren was triggered.

Police personnel erect a barrier to prevent traffic from proceeding north along Duke Street during the sitting of the Senate.

Members of the fire team apparently wanted the police to remove the barrier so that they could proceed along Duke Street, but the cops refused to budge, indicating that the area before Parliament was "sterile". They, therefore, instructed the driver of the fire truck to turn on to Beeston Street.

Apparently annoyed at the instruction of the police, the fire personnel started to apply the horn, which echoed within the parliamentary chamber.

An officer from the fire service engaged a police officer at Gordon House, complaining that the truck could not negotiate the turn on to Beeston Street, urging the senior cop to allow the vehicle free passage along Duke Street.

However, the police officer rebuked the fire personnel for their behaviour, noting that the Fire Brigade supervisor "encouraged the driver to come and disturb the Parliament".

After strong deliberations between the two parties, the police refused to yield, which forced members of the Fire Brigade to reverse more than 60 metres to Sutton Street, where they continued their journey.