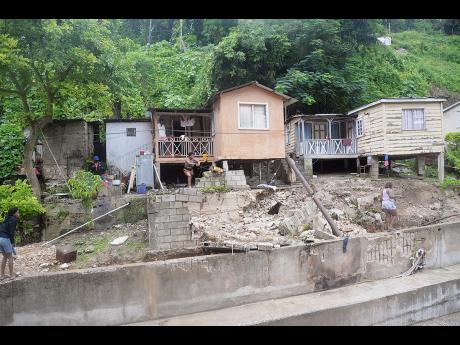 Adrian Frater
The front yard of this house in Canterbury is completely gone. 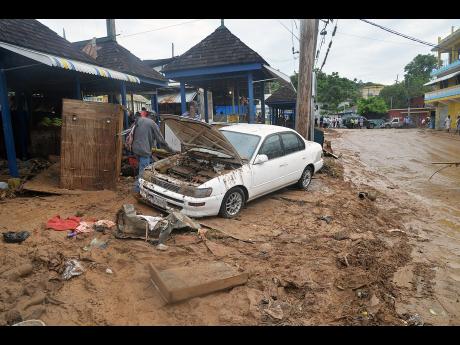 Adrian Frater
Many cars were extensively damaged as a result of the widespread flooding. 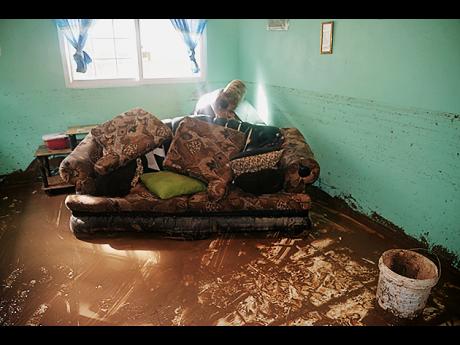 Adrian Frater
A house in Albion Lane in deep mud.
1
2
3

While disheartened by the widespread devastation caused by the three and a half inches of rainfall, which battered Montego Bay, St James, for just over four hours on Wednesday, Prime Minister Andrew Holness yesterday declared that the western city, the nation's tourist capital, is still open for business.

The Government has committed approximately $20 million to help the Second City recover from one of the worst disasters it has seen in recent history.

"The tourism sector has been affected but not significantly, not badly," said Holness at a press conference after touring the city.

"It is important to say that Montego Bay is still open for business, and what I have seen here is an incredible resilience of spirit. The people of Montego Bay, especially in the town centre, who have been affected, they are up and about, they are cleaning up, drying out, and they are looking to start again."

While not absolving the persons who do not operate in a socially responsible manner of their bad habits, the prime minister said that the rain was both intense and unusual.

"We are now experiencing weather events that are sudden, intense, and have significant scope to damage," said Holness, who admitted that he could not recall seeing such devastation locally as Montego Bay had just undergone. "These weather events have a fiscal impact. It impacts private property owners, and it has impacted public property, particularly infrastructure."

The prime minister, who toured sections of Flankers, downtown Montego Bay, North Gully, and the Riu Hotel, which all experienced differing levels of devastation, was full of praise for the resilience of residents and business operators, who spent yesterday cleaning up.

"I haven't seen one person with a defeatist attitude. Everyone is positive. It speaks to the kind of frontier spirit of Montego Bay, the go-getting, the enterprising, the hard work, the optimistic spirit of Montego Bay," noted Holness. "I want to commend the people of Montego Bay who have been affected but who have come out nonetheless to restart their work. The Government will support, as much as we can, the recovery effort."

Montego Bay's mayor Councillor Homer Davis, who also spoke at the press conference, said that despite the destruction, he was quite optimistic that with the level of restoration work now taking place, the city should be back to normal by Sunday.

"Every tributary and every gully overflowed its banks. It impacted downtown, Flankers, the Riu Hotel, and so many other places. I have never seen anything like this - total devastation," the mayor said. "We have activated our emergency systems. Emergency funds have been made available and clean-up work has started. We are aiming to make MoBay normal by Sunday," said Davis.

Local government minister Desmond McKenzie, who said that he was totally blown away by what he saw on the ground in Montego Bay, said that the Office of Disaster Preparedness and Emergency Management, the local government ministry, and the St James Municipal Corporation would begin an immediate assessment of the persons who had been affected with a view to providing assistance.

"We have given the municipal authority permission to take $10 million from its emergency funds to start working right away. We will be making another $10 million available from the equalisation fund," said McKenzie.

"We are very happy that there is no recorded loss of life, but there has been extensive damage that has been done to private and public property, and it is the commitment of the Ministry of Local Government to work closely with the St James Municipal Corporation, and I will be back here from Tuesday next week to spend at least two days in the parish doing a detailed assessment and to see how best we can respond to this major crisis."