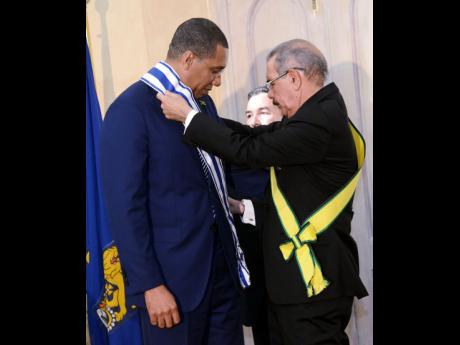 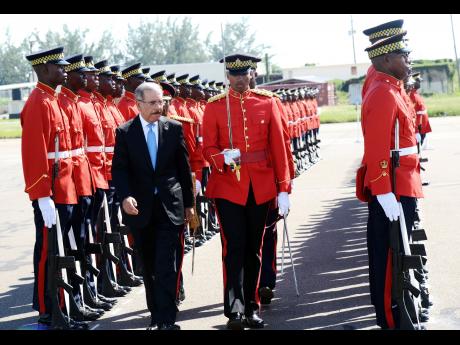 Rudolph Brown
Danilo Medina Sanchez, president of the Dominican Republic, inspects a guard of honour on his arrival at the Norman Manley International Airport in Kingston yesterday. 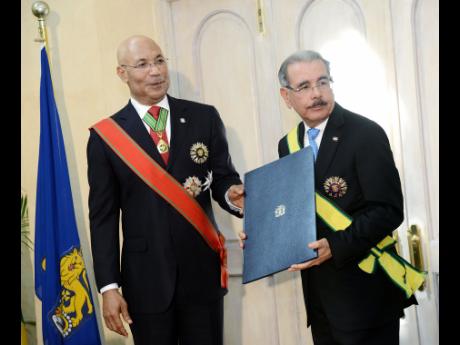 Rudolph Brown
Danilo Medina Sanchez (right), president of the Dominican Republic, is conferred with the Order of Excellence for his contribution to development in the Caribbean by Governor General Sir Patrick Allen during yesterday’s state luncheon at King’s House.
1
2
3

Visiting Dominican Republic President Danilo Medina Sanchez said it was important that Jamaica and his country continue to forge greater ties, citing the commonality of a regional space and economies of size to be the bedrock of cooperation.

"I urge that we build a Caribbean market to facilitate trade between our people, as we are already economies of scale and linked by our mutual interests. It is important to note that we have had more association between our countries than which existed for the last 40 years," he noted, speaking through an interpreter.

Medina was later conferred with the Order of Excellence for his contribution to the development in the Caribbean by Governor General Sir Patrick Allen during yesterday's state luncheon at King's House.

Medina returned the favour by conferring the Dominican Republic's highest award to a foreign government leader, the Order of Merit of Duarte, Sanchez and Mella on Prime Minister Andrew Holness.

The Dom Rep president pointed out the improved relationship between both countries, saying that much has been done in the past few months when compared to the relationship they shared over the last four decades.

He stated that the Order of Excellence awarded him was not only personal but also for the people of the Dominican Republic.

"Thank you for honouring me. I know it's not just my honour but also an honour for my people," he said.

A similar sentiment was expressed by Holness. And he, too, used the opportunity to call for the continued expansion of trade and bilateral arrangements between the countries.

"I am both honoured and humbled. This is the highest honour that can be bestowed on any foreign head of government, and I look forward to our collaboration at the personal, national, regional and international levels," Holness said.

The prime minister said it was his pleasure welcoming Medina and his delegation to Jamaica, adding that the visit has afforded both men the opportunity for discussion on a range of bilateral, regional and international matters of mutual interest.

"I'm also most pleased to be nominated by you for the conferral of this very prestigious honour of the Order of Merit of Duarte, Sanchez and Mella, following my own visit to your country in May," said Holness.

Meanwhile, Governor General Sir Patrick Allen expressed his pleasure at having the president and his delegation as guests.

"We share a significant portion of the tourism market in this region. Therefore, I am confident that your visit will contribute to the strengthening of the bond of friendship that exists between our two lands and that these bonds will endure long after your visit," the governor general said.

Medina and members of delegation were scheduled to attend the opening ceremony of the United Nations World Tourism Organisation Conference at the Montego Bay Convention Centre in St James before returning to his country.