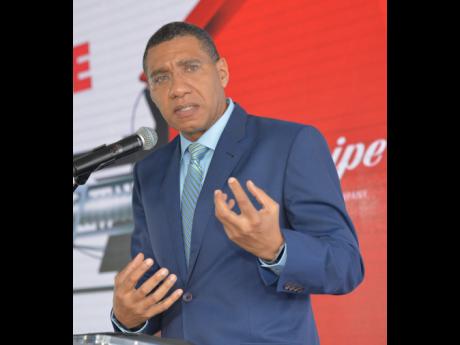 Two state entities have spent a combined total of almost $27 million to purchase new high-end vehicles for the Office of the Prime Minister (OPM).

"(The) DBJ board approved the purchase of a vehicle for our parent ministry, the Office of the Prime Minister, subject to the duty concession applied. The vehicle is registered to the OPM and a lien taken on it by the DBJ," said Milverton Reynolds, management director of the entity, in response to questions from The Sunday Gleaner.

"In 2012, (under the previous administration) a DBJ vehicle was assigned to the OPM. It should also be noted that before 2012, the DBJ assigned a vehicle to our then parent ministry, the Ministry of Finance," added Reynolds.

According to Reynolds, he is not aware of a Government ministry paper which specifically prohibits this kind of transaction.

"The board, on granting approval, would consider the merit of the request, especially where the need occurred under circumstances which are urgent and for which there was no budget. Where vehicles requested, they are usually bought in the DBJ's name and assigned to the portfolio ministry," said Reynolds.

For its part, the PAJ said while it owns the vehicle, it is registered in the name of the OPM because that entity was qualified based on the Government's guideline to get a concession.

According to the PAJ, it holds a lien on the vehicle which is in the possession of the OPM and will be disposed of using the usual guidelines, with its staff being given the first option to tender for it.

In the meantime, the OPM said the two entities were asked to provide the vehicles because the ones assigned to transport Prime Minister Andrew Holness and his security detail were in an extremely poor condition and resulted in monthly breakdowns.

The OPM added that high maintenance costs, unreliability due to the frequency with which they were out service, as well as security risks associated with their continued use by the prime minister's security detail led to the need for urgent action.

According to the OPM, neither it nor the Ministry of National Security had the budgetary allocation to replace the vehicle this financial year, and a decision was made to seek the assistance of the DBJ and the PAJ.

"The vehicles purchased replaced three 14-year-old BMW 530i vehicles which have been in the government fleet since the 2007 World Cup," added the OPM.