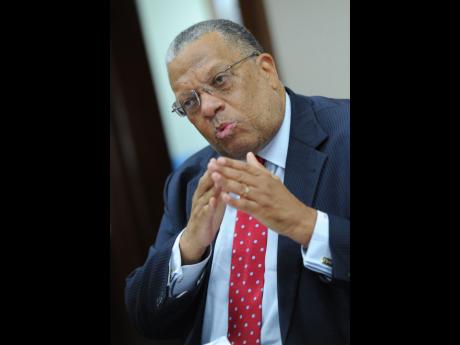 The impact crime is having on the country dominated the weekend retreat of the Opposition People's National Party (PNP), as it crafted a "policy framework to guide the next PNP government" to create a Jamaica for all.

Dr Peter Phillips, the party's leader, speaking at a press conference at its St Andrew headquarters yesterday - hours ahead of National Security Minister Robert Montague's address to Parliament - said that with only a five to six per cent conviction rate for murders in Jamaica, there was need for the establishment of a special major investigation task force for high-crime areas.

The task force, according to Phillips, is one of 10 main points the PNP has advanced towards a safer Jamaica, in the face of 94 per cent of murderers who go free.

"The Government must immediately establish the special major investigation task force dedicated to the investigation of murders in the high-crime areas with a focus on crime producers and persons of interest. In doing this, there must be protection for investigative officers," the opposition leader said, adding that the task force must pull together the best-trained investigative persons with the assistance of international partners.

Phillips said legal expertise should be provided for the task force to guide the preparation of cases for prosecution as was done with Operation Kingfish and the Major Organised Crime and Anti-Corruption Task Force. This is to facilitate cases to be brought before the courts with more speed, he noted, as in the United States where the District Attorney's Office assists with investigation.

The opposition leader said the Government must make crime fighting a priority, especially when billions of dollars can be found to spend under questionable circumstances. He said there was a critical need to upgrade the technologies for intelligence gathering and include the use of drones for surveillance in high-crime areas.

1. Improve morale of members of the security forces and bolster the legal defence fund for police officers. It is difficult to call on them to confront the problems of criminals in the street with morale so low. Immediate programme needed to repair facilities in which the police work.

2. Immediate recruitment to bring police force to full strength. The police force is understaffed by some 3,500.

3. Provide the force with the mobility it needs to carry out its work. Provide 800 new cars to improve police mobility. Cancel the present contract for the importation of used cars.

9. Ramp up international cooperation. Cooperate with international partners with respect to intelligence and prosecutions of organised crime in relation to lottery scamming, gunrunning and drug trafficking.