Prime minister satisfied with state of emergency in St James 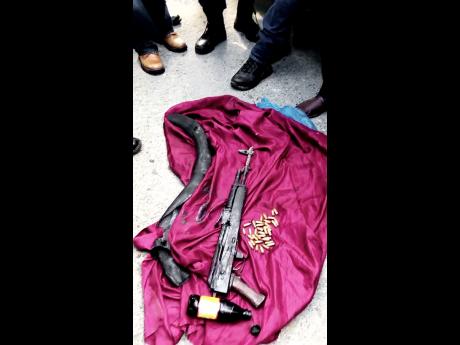 Contributed
The AK47 found in St James yesterday while Prime Minister Andrew Holness was on a tour of sections of the parish.

Prime Minister Andrew Holness has expressed satisfaction with how members of the security forces have used the extraordinary powers given to them under the state of public emergency now in force in St James.

"I think the members of the JCF (Jamaica Constabulary Force) and the JDF (Jamaica Defence Force) have executed their duties in a commendable way, and this is a huge step towards building confidence between the public and our security forces," said Holness, following a tour of sections of the parish.

Holness said that the members of the security and are being meticulous and accountable in how they operate. He added that while the accommodations for the persons who are detained are not the best, they meet the basic standards.

The prime minister also got a close-up view of the harsh realities of the horrifying face of the crime situation in the parish as he was taken to Salt Spring to view one of the three rifles seized by the security forces between Friday night and midday yesterday.

After a marathon private meeting with a small group of major stakeholders in the parish, Holness said that while they had concerns about the international fallout, they were complementary of the security forces and confident that there would be gains in the future.

Holness also indicated that the closing hours imposed at the start of the state of emergency could be relaxed shortly.

"Everything is going to be all right. We are working hard to fix the crime problem," Holness told residents of Flankers before moving on to Salt Spring. "I hear something is happening in Salt Spring, so I am heading there ... . Don't worry. We are going the fix the crime for you."

"Today, I witnessed first hand a firearm recovered, an AK47, well greased, well oiled, obviously a weapon of destruction that has destroyed lives," said Holness as he appealed for persons to share information on where the other illegal guns are hidden.