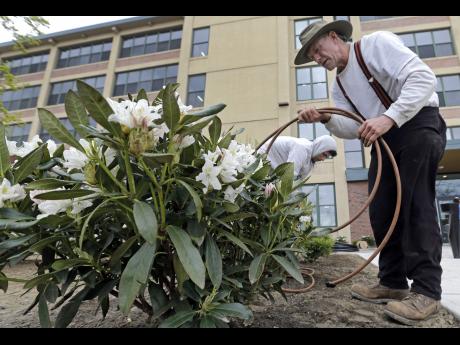 AP
In this April 25, 2017 photo, Stephen Faulkner, owner of Faulkner's Landscaping & Nursery, works on an irrigation system after struggling to find seasonal help because of the US government tightened up on H-2B visas, which are issued for seasonal, nonagricultural jobs.

Elsie Douglas-Sinclair, who operates the overseas employment agency Len-Clair Recruiting in Mandeville, Manchester, has barely managed to get anyone on the H-2B programme over the last two years.

She says this is because the 66,000 cap set by the United States government is being reached very early each year.

According to Douglas-Sinclair, she was preparing to close her shop, but the death of her husband a few weeks ago forced her to reconsider this plan.

"For me right now, I don't even know where I am going," Douglas-Sinclair told The Gleaner.

"A little small person like me operates until they just drop out. I know two other persons who just drop out of this because you have to rent an office and all of that. It is just hard because if you don't get the jobs, you have to pay bills.

"You have to pay light bills. I even cut off my Internet right now because I have it from when, and I have to just disconnect it until I get something," she said.

As the operator of a licensed oversees employment agency, Douglas-Sinclair noted that she has to pay taxes as well.

"I am still walking, and I have been doing this from 2012, so you must know. I am just trying to go the right way and just work with the employers, but I am still taking taxi," she said.

"The only way I would continue with it is if I get a sponsor for the J1 (student visa). Otherwise, I am trying to get away from H-2B because it is not lovely," said the widow.

The H-2B visa programme allows US employers to take foreign nationals to the United States to fill temporary low-skilled and non-agricultural jobs, while the J1 visa offers students cultural and educational exchange opportunities, plus summer employment and on-the-job training in the US.