UPDATED: Get help! - Cops urged to seek treatment for stress after colleague's suicide 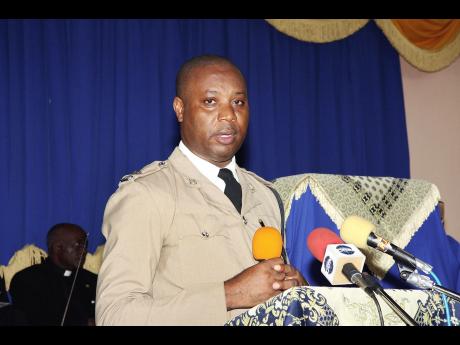 The Police High Command has issued an appeal to the men and women of the Jamaica Constabulary Force to seek help when they are undergoing stress.

Reacting to the death of Senior Superintendent Dermot Lawrence, who is believed to have committed suicide in St James last Friday, the High Command pointed to the support systems in place to help cops.

"We are mindful of the intense stressors of the job and the impact these can have on our members' personal lives and performance," said the High Command in a release.

"We, therefore, implore our members to avail themselves of the mechanisms that the organisation has established to cater to their overall well-being, to include three main support systems - the Volunteer Pastors Programme, the Chaplaincy Unit and the Medical Services Branch," the High Command added.

Yesterday, Lawrence's death cast an eerie shadow over the police fraternity in Montego Bay as the news has left many of his colleagues and the wider community in shock

"When I heard the news, I simply couldn't believe it ... it was only after a trusted colleague confirmed it that I finally accepted that it is true," said one senior police officer, who asked not to be named.

"I have been hearing that he was having domestic issues, but as a man who is trained to handle stressful situations, I never expected him to do anything like that," the senior cop added.

According to reports, at approximately 7:30 p.m. last Friday, Lawrence's wife and daughter returned home to find him hanging by the neck from the staircase inside the house.

The family members raised an alarm and alerted the police. A unit from Montego Bay Freeport Police Station went to the scene and found Lawrence dead.

Reports are that last Thursday, the police were summoned to a Mango Walk property house after residents reportedly heard explosions there. When the police went to the house, Lawrence reportedly told them that he had accidentally discharged his weapon.

"I don't know what action was taken, but he (Lawrence) was left at the house," one police source told The Sunday Gleaner.

"I don't know what might have been bugging him, but it is sad that his life has ended in this tragic way."

Lawrence, who was the senior officer in charge of administration at the Area One Headquarters in Montego Bay at the time of his death, served a stint as head of the Hanover Police Division before being assigned to St James.

The Police High Command yesterday expressed condolences to the family, friends and colleagues of Lawrence, and said his work ethic and discipline were a blueprint of excellence in policing.

"His 37 years of distinguished service to the force and country spanned postings across multiple geographic divisions, which have benefited enormously from his input," said the High Command.

*NOTE: An incorrect photo was earlier among those attached to this story. We regret the error.